Animal Crossing: New Leaf[nb 1] is a simulation game for the Nintendo 3DS. It is the fourth main installment in the Animal Crossing series outside of Japan.

While retaining much of the gameplay from older titles, Animal Crossing: New Leaf marks a large change in the series, as the player now becomes the mayor of the town. With the help of Isabelle and the townsfolk, it is now the player's job to make the town a better place to live. Due to this new role, the game's name is most likely derived from the metaphor "turning over a new leaf", meaning to change a person's job/life, since the player is suddenly assigned the new role of mayor. Coincidentally, the player taking over as mayor was referenced in previous games where, on April Fool's Day, Tortimer would prank the player by saying he is soon going to retire and let the player serve as mayor. These jokes may have played a major role in deciding to finally make this a reality in New Leaf. Like with other Nintendo 3DS titles, the game can be bought from a store or from the eShop. The digital version requires 6,002 blocks of free space on the SD Card to be downloaded. 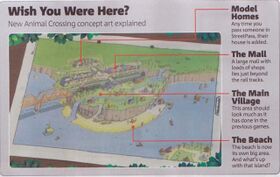 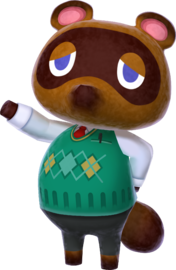 At E3 2011, the rumors were proven false. During Nintendo's press conference, the Animal Crossing logo, among others, appeared on-screen as a list of upcoming 3DS games. Additionally, a new trailer was released. The trailer showed off a new feature in the game: swimming and diving in the sea. Also, a player was shown changing not only his shirt, but also his shoes and pants. A player was also shown coming out of what appeared to be his tent-house. Throughout the town, benches and a beehive were shown, with a villager and later a player sitting on the bench. A new character was also shown, a yellow dog following the player. Fans quickly assumed she was the 'eager secretary' that helps the player mayor the town.[8]

Nintendo later announced in April 2013 that the Animal Crossing: New Leaf 3DS XL bundle would also be released in North America and Europe, which includes a copy of New Leaf on its SD card at a total price of $219.99.

Prior to the release date in the United Kingdom, players could pre-order New Leaf from GAME and get a free Isabelle and Town Hall figurine.

Welcome amiibo introduces amiibo compatibility to the game. Players can summon Wisp, who will prompt them to scan a character's amiibo to make him to transform into them. Villagers who are summoned can be invited to move into town, and scanning special characters induces as-yet-unknown functionality. 50 villagers from Animal Crossing and Doubutsu no Mori e+ who are absent in later entries return to the series with this update. They live in mobile homes found in a new RV park location, the Campground, managed by a new special character, Harvey. Scanning their amiibo will cause them to set up camp in the park, from where they can be invited to move into the town. Players can also buy furniture items from the RVs, using a new currency known as MEOW Coupons

The tropical island from Animal Crossing returns in New Leaf as Tortimer Island, which can be accessed from the dock after certain conditions have been met. Kapp'n can take up to four players to the island on his motorboat for 1,000 Bells, and the location is accessible to Wi-Fi visitors. No items can be taken to Tortimer Island, and all items in every players' pockets will kept in storage until they return. On Tortimer Island, players can participate in a variety of 38 minigames, called tours, hosted by Tortimer himself. Winning these tours wins the player medals which can be used to buy exclusive items at the island's shop including Wet Suits. The items collected on and around the island must be put in a box near the entrance. The box has room for 40 items and all items in the player's inventory when they leave will be sold for a cheaper price than Re-Tail- except for rented tools and equipment, which will automatically be collected before the player leaves. Rented tools include the axe, shovel, net, fishing rod and wet suit.

Many villagers from the previous games make their reappearance, in addition to a number of new ones. The number of villagers able to live in each town is regularly 9 but setting up a Campsite and convincing the villager inside the Campsite to move into town can make a total of ten. New species of villagers have also been introduced, including the hamster and the deer. Two new personality types, smug and big sister, have been added to the game in addition to the returning six, making for a total of eight different possible personalities. Each personality now has their own pitch of Animalese, unlike previous games where the voices only differed by gender (with the exception of cranky villagers).