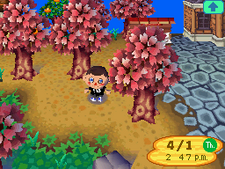 A player standing near some trees and town hall.

The flower mechanic has been expanded on with Wild World. Flowers now wilt if not watered for several days, and can negatively impact the environment rating. Flowers can also breed with other colors to produce differently colored flowers. Roses, dandelions, and Lilies of the Valley (called Jacob's Ladder in this game) are new flower types introduced in Wild World. In addition, the default flower colors are now red, yellow, and white. 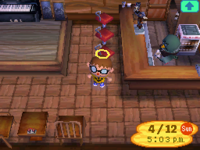 New locations in Wild World include town hall, the observatory, The Roost, Shampoodle and the checkpoint.

21 villagers from the Japan-exclusive Doubutsu no Mori e+ return and receive localized names for the first time. 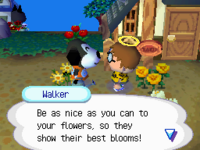 New tools such as the Slingshot and Watering Can and the inclusion of golden tools were introduced in Wild World. Patterns made by the player can not only be worn by them but can also be placed as tiles on the ground outside. 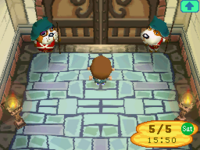 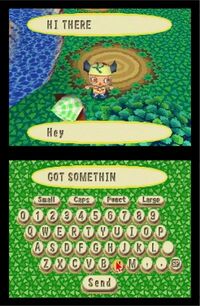 A 1.1 revision of the game, which fixed some glitches from the initial release, was released in North America and Japan in 2006.[15]

Animal Crossing: Wild World received generally positive reviews, receiving a score of 86 out of 100 on Metacritic, a review aggregator site.[17] The game, like its predecessor, was praised for its open-ended gameplay, amount of content, and "addictive" nature.[18][19] IGN gave Wild World the "Best Online Game" award in their "Best of 2005" awards, stating the online functionality "open[s] up a whole 'nother world" due to the game's open-ended and social nature,[20] and Nintendo World Report called it, paired with Mario Kart DS, "probably the best thing Nintendo could have launched Wi-Fi Connection with."[19]

In November 2005, Media Create, an entertainment data analysis company, reported that Wild World had sold 325,466 copies in Japan during its first week of sale.[21] By July 2008, the game had sold a total of 4,679,907 copies in Japan, making it the 4th highest-selling DS game at the time.

A set of collectable cards, known as Millefeui Cards, was released to promote the game. Another two sets were released alongside Gekijōban Doubutsu no Mori.[24]