Difference between revisions of "Apple Set" 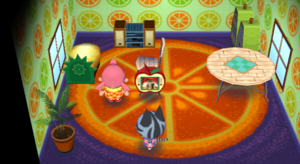 The Juicy-Apple Set, also known as the Apple Set, is a fruit-inspired furniture collection in the Animal Crossing series introduced in Doubutsu no Mori. It consists of two furniture items that resemble an apple, hence its name. In Animal Crossing: New Horizons, the items in this set can only be obtained via crafting. The recipes, with the exception of the rug, will be given to the player by Tom Nook early in the game if the player's native fruit is cherries.