"I caught a birdwing butterfly! A green light in midair!" —Wild World

"I caught a birdwing butterfly! Wow! It's about the size of a bird!" —New Leaf

The Birdwing Butterfly (アレクサンドラアゲハ, Arekusandora ageha) is considered the rarest butterfly in the game, with reference to its immense size and rarity in real life. It can be found during the summer, between June and September, from 8 a.m. to 5 p.m.. It can be found flying near flowers.

As with all insects in the Animal Crossing series, the Birdwing Butterfly can be donated to the Museum followed by a short monologue by Blathers, the curator.

"Hoo my, what a butterfly... I now see why it's touted as the world's largest butterfly, eh wot? I'd heard the wings of this particular butterfly can extend over a foot...but up close, the look bigger still! If one of these flew into me while I was out flying... I'd likely pass out in horror and plummet on the spot!" 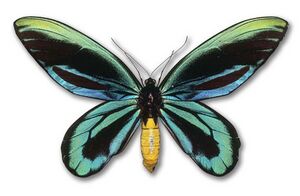 The Queen Alexandra's Birdwing (Ornithoptera alexandrae) is considered the largest butterfly in the world, named after Queen Alexandra, wife of King Edward VII of the United Kingdom. It was discovered by Albert Stewart Meek, who was employed by Lord Walter Rothschild (who named it) in 1907, in Papua New Guinea. It was shot down using a shotgun, but its early stages were discovered and bred through to get to this stage. The female birdwing has a wingspan of up to 31cm, while the male (which appears in game) has a smaller wingspan of up to 26cm. The birdwing flies quite high in the rainforest, making it hard to catch, which is the main reason hunters shoot them with shotguns. The birdwing in Animal Crossing also flies higher than usual butterflies, a reference to its flying habits in the real world.