Revision as of 14:43, May 8, 2021 by PanchamBro (talk | contribs) (Reverted edits by 141.0.129.245 (talk) to last revision by Vivian)
(diff) ← Older revision | Latest revision (diff) | Newer revision → (diff)
This article is about the phrases villagers use during conversation. For the phrases said by the player when catching a fish, bug, or sea creature, see catch quote. 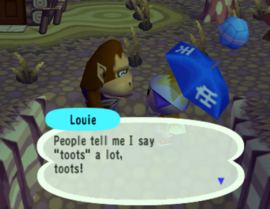 Louie talking to the player, saying that he says "toots" a lot.

A catchphrase is a word or phrase that a villager repeats during conversation, which they usually say towards the end. Every villager has an initial catchphrase which they will ask the player to change, or by going to the Town Hall or Resident Services and reporting them (not in Animal Crossing: Wild World). Villagers may also adopt catchphrases from other villagers. For example, Elmer, who has the catchphrase "tenderfoot", may adopt another villager's catchphrase at random without the player being notified. Most catchphrases relate to a villager's personality type, species, name, or appearance. It is believed that many non-villagers, such as Blathers, have catchphrases though many usually use a number of different phrases and words, rather than the single catchphrase. Blathers and Celeste's catchphrases may be hoot, Tom Nook's catchphrase may be yes, Brewster's may be coo, and Porter's may be eek.

In Animal Crossing: New Leaf, catchphrases are used less obsessively than in previous games, and many of the new villagers have initial catchphrases that seem like nicknames instead of mindless repetition (not to be confused with actual nicknames).

The player being prompted for a custom catchphrase in New Leaf

To change the catchphrase of a villager in Animal Crossing, a villager must ask the player to change it. The player will know when they are being asked when the villager is surprised to see them and follows the player until spoken to. This word cannot be a swear word and cannot have more than 10 characters.

The only way to change the catchphrase of a villager in Wild World is for them to ask the player for a new one. When a villager wants to talk to the player, they will look at them and show they want attention by an exclamation mark appearing briefly over their head, followed by the villager walking up to the player and/or following them. However, not all occasions where the villagers wants the player's attention may be because of their catchphrase. When two villagers talk and the player does not attend the conversation, and at the end they both walk off happily, the first villager of the couple may borrow the catchphrase of the second one (but not vice versa).

The methods are the same as in City Folk, except the player must consult Isabelle instead. When reported, the catchphrase will become "uh-huh".

The methods remain mostly as they were in City Folk and New Leaf, except sometimes the player can also directly witness a conversation between two villagers where one will admire the other's catchphrase and obtain permission to use it themselves. When reported, instead of the catchphrase being changed to a simple word or phrase, it will be reset to the villager's default catchphrase. For example, Alfonso will go back to saying "it'sa me" when reported. However, the villager may pick up a new catchphrase very soon afterwards, sometimes from the same villager that they obtained their previous new catchphrase from.

Preventions against changing a catchphrase[edit]

A catchphrase can be changed to anything provided it: