Cockroaches are common, inexpensive bugs that can be found throughout the year in Doubutsu no Mori, Animal Crossing, Doubutsu no Mori e+, and Animal Crossing: Wild World, resting on trees and on flowers; in Animal Crossing: Wild World, they appear only on trees or spoiled turnips and are much rarer. They will fly away if the player approaches too closely. They are small, brown insects and are generally regarded as being disgusting, most notably by Blathers, the curator of the museum. Due to their constant availability and negative connotations with filth, they are worth only 5 Bells, making them the least valuable bug in the entire Animal Crossing series. Cockroaches are no longer able to be caught in Animal Crossing: City Folk or Animal Crossing: New Leaf, but still appear inside the player's home if the player does not enter it for approximately a week or longer. One Cockroach makes a cameo in Doubutsu no Mori (film), as one was caught by Yu as a present to Ai, who screamed in horror as it attached itself to her face.

When donated to the museum, the Cockroach will roam freely around the floor of the insect exhibit. If the player repeatedly steps on it, a voice (possibly Blathers) will ask the player to refrain from doing so. As with all insects in the Animal Crossing series, the Cockroach can be donated to the Museum by talking to Blathers, who will give a small talk on it.

"Hoo... Uh... Huh-hoo? Is that a cockroach?! Oh, how repugnant! How foul! The vileness! The putrescence! Hoooo-ecchh! I will NEVER understand why we're required to include cockroaches in our collection. It makes no sense. Well, who am I to question management? Hoo, indeed! And in any case, what's one more filthy insect, eh wot? Hoooo, my... I hate this part. I hear it wriggling in there..."

Blathers, the curator of the museum, will barely try to contain his utter contempt for his least favorite of insects:

"NOOOOOOO! Hoo-rrific! Please. I must protest! This is a cockroach, and a fearsome one at that! I'm terribly sorry for my outburst, but I simply abhor the wretched things. I often wonder aloud why cockroaches are even part of the collection, actually. The decision-makers atop the corporate ladder often seem quite daft, eh wot? Blech... well, I suppose I must take this."

The Cockroach can be found running around the first room of the insect exhibit. They will run away from the player, sometimes jumping over it. If a player tries to step on it, a sarcastic reminder will appear, probably written by Blathers:

"Dear patrons: This is a thoughtful donation from (Player's name). Please do not step on it."

Cockroaches in the home

Cockroaches appear in the player's homes if neglected for a week or more, scuttling on the floor and taking shelter underneath furniture. They cannot be caught and must be crushed by stepping over them. Upon killing a cockroach, a small ghost floats into the air and disappears. In Animal Crossing: City Folk, once all the cockroaches have been killed, the player does a victory cheer similar to the one displayed when a mortgage is paid off or the Tom Nook's tasks are completed at the start of the game.

The cockroach ghost seems very similar to the Pikmin ghost when a Pikmin dies. In Animal Crossing: Wild World, once they are killed and the player comes in the house again, another swarm of cockroaches may reappear. 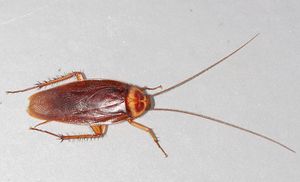 The American cockroach, also known as the Palmetto bug or waterbug, particularly in the southern United States of America, is the largest species of common cockroach, and is often considered a pest. It is native to the Southern United States and common in tropical climates. Human activity has extended the insect's range of habitation. Specimens have been observed in eastern North American cities as far north as New York City, Toronto, and Montreal, though its intolerance to cold restricts it to human habitations. Global shipping has transplanted the insects to world ports including Tenerife (Spain), Southern Spain, Greece, Taiwan, and Cape Town and Durban, South Africa.

The insect is believed to have originated in Africa, but had become established in the southern U.S. by the time that it was given its name.