Difference between revisions of "Diary" 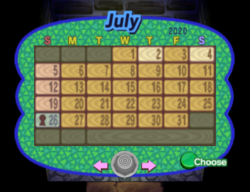 A total of sixteen diaries are in the game, though they all function identically. They can be purchased from Nookway and Nookington's or received from Tortimer on New Year's Day.[nb 2] Diaries appear at the end of the furniture section of the catalog and can all be reordered. Additionally, each player has a College Rule in their house by default. If the player repeatedly attempts to read another player's locked diary, this may cause the game to crash.