Difference between revisions of "Drake"

Drake is a lazy duck villager from the Animal Crossing series, appearing in every game since Animal Crossing: Wild World. The name "Drake" comes from the word given to male ducks. His Japanese name comes from foie gras - a food made with ducks. His initial phrase, "quacko", is play on the word "quack", the sound ducks make. Likewise, His Japanese phrase, kamo ne, is a play on kamo, meaning "duck," and ka mo ne, meaning "maybe." He shares this catchphrase with Bill, another male duck; and shares his Wild World picture quote with Elmer, another lazy villager.

Drake is a green duck with a bright yellow bill and legs. He has thin, shaven eyebrows, no hair, and ghoulish eyes. He resembles a mallard, a type of duck.

Like other lazy villagers, he likes to think of himself as a superhero named "Fashion Lad" or a "romantic," as well as having a keen interest in food and relaxation. As "Fashion Lad," he may ask for new clothing to fulfill his role. He may also state that he was setting up a superhero team with another villager but he and the villager were arguing about who would be the sidekick. He gets sad often, especially when other villagers "disrespect food". He likes bananas, food games, comic books, and camping. He is also very kind but always loves to talk about himself. He loves bugs so he may ask the player to get some for him. 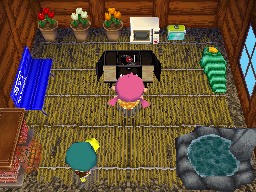 Most of the time, Drake is either very hungry or very full. Actually...has anyone ever seen him when he's properly fed? He could be like a totally different person.
Preferred theme: