Difference between revisions of "Drift"

Drift is a jock, frog villager in the Animal Crossing series. In Animal Crossing, he appeared as an islander. His name may come from his original role as an islander and his catchphrase comes from the sound a frog makes combined with "bro", a term that jocks commonly use in conversations. His Japanese name, Doku, meaning poison, likely comes from his coloring, which is similar to a poison dart frog. His Japanese catchphrase is the sound of a frog's croaking in Japanese.

Drift is a red frog with orange, yellow, and brownish gray colored markings all over his body and face in what looks like a "smeared on camouflage" design. He has a huge smile. As an islander in Animal Crossing, he has a flowery wreath around his neck, which is removed in his artwork for this game as well as other installments.

Drift has a jock personality, which means he will have a keen interest in sport and fitness, making him appear competitive and in some cases rude when talking to other villagers, usually criticizing their fitness. He will appear slow-witted and absent-minded when talking about deep, meaningful things. He will get along well with peppy, uchi, cranky and other jock villagers. He get confused by the choice of lifestyle followed by lazy villagers, who appear opposite to the jock personality. He may also offend and upset snooty villagers, due to them being difficult to get along with.

In Animal Crossing, Drift's house, like other islander houses, lacks furniture when first viewed. He will request from the player a CD Player, a Flagman Sign, a Haz-Mat Barrel, an Iron Frame, a Men at Work Sign, an Oil Drum, a Steamroller, and a Wet Roadway Sign. 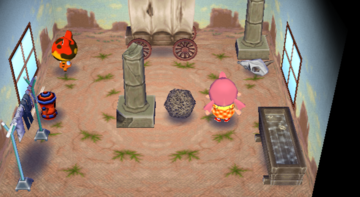