Difference between revisions of "E-Reader card" 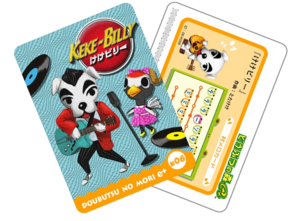 A collection of Animal Crossing e-Reader cards, packaged under the name Animal Crossing-e in North America, was released in 2002 and 2003. There are a total of 326 Animal Crossing-themed cards (plus two promo cards) produced by Nintendo for use with the Nintendo e-Reader within the game. The cards were distributed in four series, with an initial North American release in October 2002. Each pack contained a random assortment of five cards sold at $2.99 MSRP.[1] In order to the use the cards, the player must scan the cards at the appropriate in-game location, which varies according to card type; the Doubutsu no Mori+ cards can only be scanned on the Game Boy Advance by itself, as the original Japanese e-Reader cannot connect to the Nintendo GameCube.

Of the two promotional cards released, the first (titled Animal Crossing) was bundled with the e-Reader accessory in North America while the promotional NES Link card was included in the December 2002 issue of Nintendo Power magazine.[2]

Another three series containing a total of 108 cards were released exclusively in Japan for the release of Doubutsu no Mori e+. These series include cards for the new villagers and songs as well as 12 new design cards.

There are 275 total character e-cards, each of which has a picture of a villager or special visitor on its front and additional information about them on the card back, such as their gender, catchphrase and their astrological sign, as well as a short paragraph describing their personality and lastly, a password that can be redeemed for a special item. The cards can be used in the following ways:

If the player sends an e-card password to a villager in their town whose identity matches the character card from which it came, they will likely receive a letter containing an NES game as opposed to that e-card's standard item. The images below show the letter sent by each of the six personality types.

Sibling Cards have two special characters on them, having two dot codes and two passwords. Scanning the cards or mailing the codes has the same effect as standard Character Cards, with the player receiving an item from the character on the card.

Design Cards can be scanned at the Able Sisters and will give the player a unique design as well as a comment from Sable.

Town Tune Cards can be scanned at the town tune board outside the post office, where they will give a unique town tune based on a K.K. Slider song.

Game Cards are used solely on the e-Reader and allow the player to play minigames on the Game Boy Advance involving various villagers. Character Cards can be scanned during these games to add the characters to them.

Click on the appropriate image or text below to view a list of e-cards in that series.