Festivale is based on Mardi Gras, the last day of Carnival, a festive season occurring before Lent.

Pavé speaking to the player in City Folk.

In Animal Crossing: City Folk during the day, neighbors walking around the town will challenge the player by asking them to play games, with the chance to win candy. However, if the player loses, they have to give some candy or 500 Bells to the villager. There is no limit of how many games can be played with the neighbors, but only the ones outside of their homes will offer to play games.

The games are as follows:

The candy the player has won can be given to Pavé, who will exchange it for furniture in the Pavé Series. However, players must have three of the color candy he asks for.

If a player buries a pitfall seed on the day of the Festivale, it may turn into candy the following day.

In Animal Crossing: New Leaf, the event is slightly different compared to the Festivale in City Folk. Unlike the objective in City Folk, the player must collect feathers instead of candy for Pavé. During the day, feathers can be seen falling from the sky along with confetti (the feathers can be obtained using a net).

The villagers walking around the town can be found wearing headdresses with different colored feathers on top of them. They may also be heard singing the town tune. Villagers inside and outside their homes will both offer to play games with the player to win feathers. Some villagers will offer the player a feather without asking for anything in return.

Pavé appears in the event plaza and will ask the player to find feathers of a specific color. If the player obtains the specific number of feathers requested by Pavé or obtains a rainbow feather, then Pavé performs a dance. After Pavé has finished dancing, he will give the player an item from the Pavé Series. If he is given a Rainbow Feather, he will perform a special dance and give the player Pavé's Pic instead. 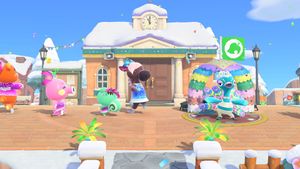 The plaza during Festivale in Animal Crossing: New Horizons

While initially absent from Animal Crossing: New Horizons, Festivale was added in the 1.7.0 Free Update. Pavé returns as the host of the event, and like in New Leaf, the player must catch and bring him colored feathers.[1]

On the day of Festivale, Pavé asks the player for three of a specific color of feathers—either a Blue Feather, Green Feather, Purple Feather, or Red Feather—which can be found floating around the island and can be caught with a net. If the player gives him the correct three feathers, or a single Rainbow Feather, Pavé gives them a random item from the Festivale Series. After the player exchanges feathers with Pavé nine times, he will ask them to bring him three Rainbow Feathers. If the player brings him them, he will give them the Festivale Float.

During the event, villagers dress up in Festivale-themed clothing (male villagers wear Festivale Costume and female - Festivale Tank Dress) and can trade one to three feathers with the player. Villagers will ask for feathers of the same color as their outfits if the player has any, and feathers of other colors if they do not. The color of the feathers that they are willing to trade for will vary.

This page could be improved with the addition of images.
You can help by uploading one or more images and including them on this page.
Retrieved from "https://nookipedia.com/w/index.php?title=Festivale&oldid=528444"
Categories:
Hidden category: