The Fishing Tourney is a fish-catching event that occurs throughout the year in the Animal Crossing series. While the principle of the fishing tourney remains the same across the series, each incarnation has different variations.

In Animal Crossing, Chip the beaver hosts a Fishing Tourney on every Sunday in June from 6 AM to 6 PM. The player can win furniture for record-breaking fish. However, he only accepts types of bass that are caught in the river (Small Bass, Bass, and Large Bass). Chip will give the player a prize for every bass they give him that beats the previous record for the day. Bass caught before the tourney can be given to Chip for prizes. If the player has the record at the end of the day, they will receive an additional gift in the mail. 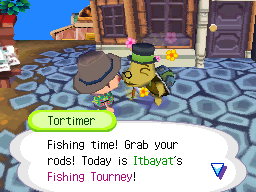 Tortimer inviting the player to join the Fishing Tourney

During the Fishing Tourney in Animal Crossing: Wild World, players can take fish to Tortimer outside of the town hall. If they present the biggest fish caught that day, they get a prize of a random furniture item. However, a villager may later submit a larger fish, so players have to keep giving fish to Tortimer if they want to win. The tourney ends at 6 PM. If the player still has the largest fish submitted at that time, they win the Fish Trophy which is mailed to them.

The Fishing Tourney occurs at the following dates:

If a player does not have a fishing rod, they can talk to Tortimer to receive one for free.

In Animal Crossing: City Folk, there are two types of tourney with different fish available. Both run from 9 AM to 6 PM. Chip returns to the front of the town hall with his tent full of coolers, where he stands eagerly waiting for contestants to bring in fish to be measured. After being shown a fish, he eats the player's submission. Winning a tourney will get players a Gold or Silver Trophy depending on which tourney they entered. The trophies are mailed to the player and can be received the next morning. Additionally, players receive a piece of common furniture from Chip every time they beat a previous size record.

During the tournaments held on the second Saturday of the month, any fish is accepted. The prize is the Gold Trophy.

During the tournaments held on the third Saturday of the month, only specific fish will be accepted in the competition. For each of those tourneys, the specific fish is chosen at random from a potential three each month. The prize is the Silver Trophy. 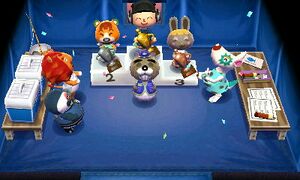 The winners of the Fishing Tourney being congratulated in Animal Crossing: New Leaf

When the winners are announced inside the tent during the awards ceremony, they stand on the first, second, and third stands on the plinth. During the winners' announcements, they will let off party poppers and Chip will give each person an award (i.e. a trophy) according to their position. The awards ceremony must take place before 9 PM or else it will be canceled, and trophies will instead be mailed. 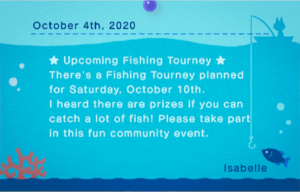 A bulletin board announcement for a Fishing Tourney in New Horizons

In Animal Crossing: New Horizons, the Fishing Tourney is hosted by C.J. instead of Chip. Players are tasked with catching as many fish as possible within three minutes. The player can participate as many times as they choose until the event ends at 6:00 PM; however, every entry after the first costs 500 Bells. While the timer is active, a generic message is displayed whenever a fish is caught instead of the player's normal joke/pun, and the "Yes!" message that normally displays for a first-time catch will not be displayed either. Fishing Rods will not break during the tourney, but they still sustain damage, and will break after the timer is up if their durability runs out during a round.

Fish the player catches are sent to a cooler in the plaza rather than their pockets. After scoring, the player can sell the cooler's contents to C.J. for 1.5 times the sell price at Nook's Cranny, and they are required to do so before they may participate again or swap their points for items. To keep any caught fish, the player must select fish from the cooler before bulk-selling.

During the event, villagers are seen fishing along rivers or near ponds on the island, and will usually wear an athletic jacket with a matching hat.

Players receive points based on the number of fish caught, regardless of their rarity.

There are additional benefits for participating in the Fishing Tourney on local or online multiplayer. In a multiplayer tournament, the 500 Bell entry fee is waived for all participants. In addition, there is a cooperative bonus: if 5 or more fish are caught between the players, all players will earn 10 bonus points (regardless of the number of fish caught individually).

To begin a tournament, only one player needs to ask C.J. to start the timer. The timer will begin for everyone without prior warning, meaning that other players can move closer to a body of water ahead of time. A tournament can only be started after everyone has cleared their coolers, whether by selling to C.J. or manually removing the fish from it.

Players can join or leave the island during the tournament, but the timer will not pause. If connection is lost and/or the island state is reset, it is possible for everyone to lose fishing progress.

After obtaining 10 or more points, players can exchange their points for "fish swag." The 13 possible items are distributed in a random order, after which the player will start receiving duplicate items. In addition, if the player obtains 100, 200, or 300 points, C.J. will mail them a corresponding trophy (bronze, silver, or gold). This total is cumulative; points that have been traded in for swag still contribute to the total, and points from previous tourneys are also counted.

Although the tourney ends at 6:00 PM, C.J. will remain in the plaza until 8:00 PM, so points can still be exchanged for rewards and fish can be sold until he leaves. After he has left, the cooler remains in the plaza for the rest of the night, allowing the player to retrieve their fish after C.J. leaves.

During the Fishing Tourney in Animal Crossing: amiibo Festival, Chip will visit and all spaces will turn into Fishing Rod Spaces. After every player has taken their turn, an awards ceremony will occur. Happy Points are given out based on placements: 1st place receives 20, 2nd place gets 15, 3rd gets 10, and 4th gets 5.

In Animal Crossing: Pocket Camp, the Fishing Tourney occurs in Saltwater Shores or Lost Lure Creek (depending on the event). Only specific species of fish with a sparkling shadow can be used for the tourney. Players can give these fish to Chip, who will measure the size of each fish and give rewards for cumulative milestone lengths. Since C.J.'s Fintastic Friends, C.J. hosts the Fishing Tourney instead of Chip.

Players have the option to rent a golden fishing rod for 80 Leaf Tickets, which gives them guaranteed chances of catching two fish with each cast. The player can also use a tourney throw net to catch several fish at once.

On occasion, Fishing Tourneys are hosted by characters other than C.J. or Chip. Candied Catches, Pumpkins, and Potion Commotion were hosted by Jack, Island Excursion was hosted by Tom Nook, and Fun Bunny Day Land was hosted by Zipper T. Bunny.