Difference between revisions of "Flick"

Flick is a chameleon in the Animal Crossing series who debuted in Animal Crossing: New Horizons. He is the son of Nat, and replaces him as the host of the Bug-Off, a bug-catching event held every three weeks during the summer. He also appears as a regular visitor to the island. Unlike Nat, who views bugs as food, Flick views them as his artistic muse, displaying an obsession with their perceived beauty on both a physical and metaphysical level. This has led to disagreements between the two about the treatment of insects.

Flick and C.J. appear to work together, with C.J. referring to him as his partner, mentioning that they live together, and implying he commissions him to create the fish models for the player.

His name may be derived from “lick”, referring to the long tongue of a chameleon.

Flick speaking to the player in New Horizons.

In Animal Crossing: New Horizons, Flick appears on random weekdays after the Resident Services have been upgraded to a building. Flick offers to buy bugs from the player at a price 1.5x higher than Nook's Cranny price. He leaves at 5 AM the following day. Once per visit, the player can commission him to make a model of a bug, which requires giving Flick three specimen of the same bug. He will mail the model the following day.

Unlike C.J., whose fish models are mostly uniform in size barring a few particularly lengthy fish (e.g. the Arapaima and Oarfish), Flick will build exceptionally large models for the Queen Alexandra's Birdwing, Banded Dragonfly, Goliath Beetle, Horned Hercules, Atlas Moth, and Giraffe Stag, each given the "Grand" prefix in their item names. Additionally, Flick will provide special dialogue when asked to craft models of these bugs, giving flowery and praise-filled descriptions of them before vowing to make a masterpiece out of their models.

Flick can also visit The Roost if his amiibo card is scanned at the amiibo phone; he brings C.J. as a guest and vice versa. If the player scans his amiibo card in Happy Home Paradise, he will also bring along C.J. to his vacation home.

Flick was added to Animal Crossing: Pocket Camp in November 2020. He hosts the Flick's Segmented Soulmates event, where he tasks the player with catching bugs to receive bug-themed prizes, such as the Butterfly-Exhibit Fountain. 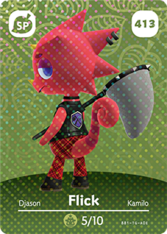 Upon interacting with Flick, he will say something relating to bugs before apologizing for thinking out loud. This dialogue will change every time the player interacts with him.

During a Bug-Off, Flick's dialogue has a greater amount of new-age style spirituality: