Difference between revisions of "Flurry"

Flurry is a normal hamster villager in the Animal Crossing series. She first appeared in Animal Crossing: New Leaf. Her English name refers to a flurry of snow, or a light, brief snow shower. Fittingly, Flurry was later added to Animal Crossing: Pocket Camp to promote the winter theme as a result, alongside Fang, Aurora, Bianca, and Diana.

Flurry is a white hamster with a tan muzzle. The inside part of her ears is pink. Her eyes are simple, black circles with a white sparkle and noticeable eyelashes, and she has blue stripes over her eyes that look like eyebrows.

As a normal villager, Flurry will appear friendly and hospitable towards the player and other villagers. Like other normal villagers, she will have an unseen obsession with hygiene and cleanliness, which she mentions when the player visits her in her home. Other than her hygiene interests, she will appear neutral and open-minded when discussing hobbies, such as gardening, bug catching, fishing, and so on. Like other villagers, she will, from time to time, ask the player for favors, feeling sorry for having to ask for help, but appearing very gracious once the task has been complete. She will get along easily with other villagers, but may conflict with lazy villagers when they talk about food and leading her on to suggesting making them dinner or lunch for them. She may also get irritated with cranky villagers due to their brusque nature.

Flurry's house contains almost all white furniture, most notably from the Regal and Minimalist Series. She also has a small kitchen area to the left of her room, consisting of a Deluxe Range and Refrigerator. Unlike many villagers, she has three pieces of furniture in which she can store items: the Refrigerator, the Princess Chest, and the Regal Dresser. Her record player plays Hypno K.K. 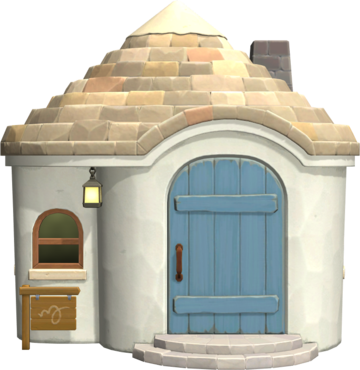