Freckles is a peppy duck villager from the Animal Crossing series. She has appeared in every game in the series to date.

Freckles is a pink and white duck with a bit of brunette hair on the top of her head, and a bright yellow beak. She gets her name from the five freckles just above her beak. She has peachy orange cheeks below her eyes. She has white tips on her wings and her eyes are round and white with large black pupils. They are positioned quite far apart from each other.

As a peppy villager, Freckles will always appear to be in a good mood. She will get along with other villagers including the player, making it easy to befriend her and gain her picture in Animal Crossing: Wild World. She will enjoy the usual hobbies, and may ask the player for bugs or fish that she finds cute. She will easily get upset, but due to a short attention span she will forget ever having the conversation. Like all peppy villagers, she dreams of becoming famous in the future and reads Ms. Nintendique, an unseen magazine read by snooty and peppy villagers in Animal Crossing: Wild World. She will get on well with normal, lazy, sisterly and other peppy villagers, but may annoy snooty and cranky villagers with her upbeat personality.

In Animal Crossing, her house has a Green Wall and a Bamboo Floor. "K.K. Calypso" plays on her White Boombox. In Doubutsu no Mori e+, her house gets new furniture and she has a Dice Stereo that instead plays "K.K. Song."

In Animal Crossing: New Leaf, her house consists of bathroom-themed items, such as a bathtub, a shark, and a shower head. K.K. Song still plays in her house, as it did in the past couple games. 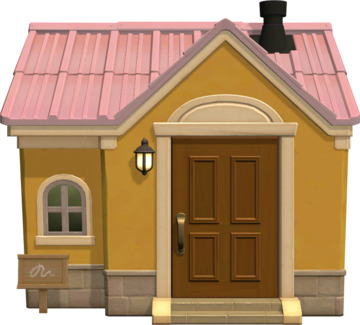