Difference between revisions of "Groundhog Day" 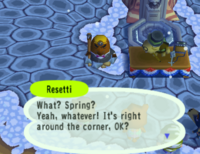 On Groundhog Day in Animal Crossing, Tortimer appears on a podium in front of the wishing well beginning at 7 AM, while four villagers stand by in anticipation of Mr. Resetti's appearance. At 8 AM, Resetti reluctantly appears as the "groundhog" and announces that spring is coming early. Beginning at 9 AM, Tortimer will give the player one of either a Pansy Model, Tulip Model, or Cosmos Model.

In Animal Crossing: City Folk, Tortimer appears outside town hall on Groundhog Day. If spoken to he will give the player a Resetti Model.

Isabelle telling the player about Groundhog Day in New Leaf.

In Animal Crossing: New Leaf, Isabelle appears in the event plaza between 6 PM and midnight on Groundhog Day. If spoken to she will give the player a Resetti Model. There is also a cardboard cutout in the Plaza, where the player can poke their head and stand beside Resetti.

The Resetti Model in New Horizons

Although Groundhog Day does not appear in Animal Crossing: New Horizons as a standard event, it appears as a Nook Shopping seasonal event beginning in the 1.7.0 Free Update. From January 25 to February 2, the player can purchase the Resetti Model from Nook Shopping.

Like other minor events in Animal Crossing: Pocket Camp, the villagers will notify the player about this day.

This page could be improved with the addition of images.
You can help by uploading one or more images and including them on this page.
Retrieved from "https://nookipedia.com/w/index.php?title=Groundhog_Day&oldid=919960"
Categories:
Hidden categories: