Difference between revisions of "Hans"

Hans is a smug, gorilla villager in the Animal Crossing series that debuted in Animal Crossing: New Leaf. He strikingly resembles a yeti, which is made more apparent by his phrase and name. His initial phrase "groovy" is possibly a pun relating to being cool. The name Hans is a popular masculine name in Scandinavian countries, places characterized by cold temperatures and mountains. Sunairu likely derives from スノー sunō (snow) and ゴリラ gorira (gorilla). His favorite saying is similar to that of Rosie, except "purr" is replaced by "turn."

As a smug villager, Hans will be kind and gentlemanly towards the player. On occasion, he will also flirt with the player, regardless of their gender. He might also come off as conceited. He will get along with all villager personalities, but he is most often seen getting along with normal, peppy and lazy villagers. Additionally, sisterly villagers might not get along with Hans, due to his flirty nature. He will go to sleep at 2:00 a.m. and wakes up at 8:30 a.m.

Hans has a variety of items in his house. There is a Fireplace with a Simple Kettle on top of it, a Conga Drum, a Dijimbe Drum, a Clothesline Pole, a Snowboard, a Ski Rack, a Freezer, an Ice-cream Case, an Exotic Bench and a Cabin Table with a Vintage Radio on top of it. He has the Modern Wall as his wallpaper and the Kitchen Tile as his carpet. He initially doesn't own a stereo, but if he is ever given one, he will play K.K. D&B. 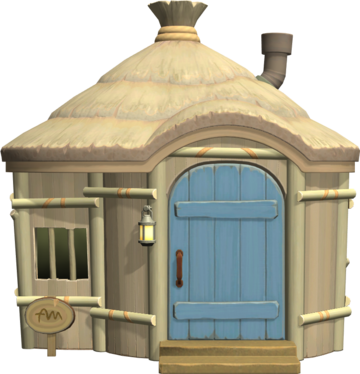