Difference between revisions of "Isabelle"

This article is about the special character. For the villager whose Korean name is Isabelle, see Bella. For French, see Caroline.

Her name was first revealed as Hisho (ひしょ), which is Japanese for secretary, during the New Leaf developer commentary,[1] then was changed in the June 2012 Nintendo Direct to Shizue, a reference to her breed, Shih Tzu.[2] When localized to English, her name became Isabelle. It may be based on the fact that the top of her head resembles a Bell sack. She has a younger twin brother named Digby who runs the Happy Home Showcase.

Since her introduction in Animal Crossing: New Leaf, Isabelle has become a mascot for the Animal Crossing series along with Tom Nook, appearing in all subsequent games and becoming the fictional head of the official Animal Crossing Twitter account though she would be temporarily replaced by Tom Nook to promote New Horizons until the month of July. Additionally, she is featured in many pieces of non-Animal Crossing media, including cameos in various games and playable roles in Mario Kart 8 and Super Smash Bros. Ultimate.

Isabelle is a yellow Shih Tzu dog with floppy ears and a ponytail. Her hair is tied up with a ribbon that has a bell on top. As such, whenever she walks, a little jingling sound is made.

In New Leaf, Isabelle tries her hardest to look up to the mayor as their secretary. Whenever the mayor completes a public works project, she will ask the mayor if they want to attend a celebration for the project's completion, and will frown if the mayor vows out with the celebration. She also values the health and safety of the player, especially in instances where the player hasn't played their town in months. During holidays and events, Isabelle will tell the mayor to take a break from their duties in order to enjoy the festivities. She will also close town hall if she ends up going to the plaza to celebrate.

In New Horizons, Isabelle retains her hardworking nature from New Leaf, but she has also been shown to be extroverted, especially in the instance of her morning announcements. Routinely, she occasionally talks about television, or various aspects regarding her life, such as Digby and her missing sock, only to blush after realizing that what she said does not qualify as news. As of 2.0, this doesn't happen as often, as she usually has different announcements to give.

Isabelle's main role in Animal Crossing: New Leaf is to act as the player's secretary and to help them with their mayoral duties. At the start of the game, she helps the player settle in by offering them advice, as well as providing them with optional tasks akin to those given by Tom Nook in previous games. In addition, she also helps the player earn their development permit, which allows for the enactment of ordinances and the construction of public works projects, by helping them attain a 100% approval rating and, when the player's house is built, making them a resident of the town. When the player gains the abilities to build public works projects and enact ordinances, she assists the human character with those as well, including the ceremonies when projects are complete.

She spends most of the time in the town hall, but is also the main character to stand in the plaza during events. During such events, the town hall is closed, preventing the player from performing their mayoral duties.

Isabelle takes over Mr. Resetti's role of reminding the player about saving until the Reset Center is built. She may be caught sleeping in the town hall if the player has been mayor for at least seven days and has connected to the internet at least once, and this will allow the Dream Suite to be built on Main Street.

In Animal Crossing: New Horizons, Isabelle acts as Tom Nook's assistant for Nook Inc. Her appearance in New Horizons requires the player to move three villagers into houses and wait the full three days for each of them to move in. The day after all three villagers have moved in and unpacked, Tom Nook announces that the Resident Services tent will be upgraded into a full-fledged building and advises everyone to use any functions they need to before construction makes the tent inaccessible. The building closes the following day for construction, and Isabelle will appear inside the building once it is finished. In her appearance for New Horizons, Isabelle now wears shoes and she will wear certain hats and outfits throughout events or seasons.

In the Resident Services building, Isabelle can be seen working around her desk, constantly engaged in an activity, such as looking out of the window or watering the office flowers. If the player sits at the Civic Consultation Center stool, she will help in changing the island tune and flag, resetting other villagers' clothes or speech, and will tell the player about the current island evaluation. Since version 2.0, Isabelle can now enact island ordinances, acting very similar to New Leaf's island ordinances. If the Happy Home Paradise DLC is downloaded, the player can also reset a villager's house interior.

Prior to its removal in version 2.0, when the player scans Isabelle's amiibo card and tries to invite her, she will say:

Hello, this is Isabelle. Player?!
You're so funny! You're practically right in front of me right now, you know!
So, um... What's on your mind?
A visit to the campsite? That sounds like loads of fun...
But...I've got a to-do list a mile long. Do I even have a sleeping bag? No, I'm so sorry, but I really can't go.
It's so nice of you to think of me, though. Some other time, maybe. Thank you!

In Animal Crossing: Happy Home Designer, Isabelle is an employee at the Town Hall and gives the player Public Facility projects, because she has heard of the player's renowned house-building skills. She will follow the player to the facility to provide a list of required items. She can also have a home built for her by scanning her amiibo card via the amiibo phone located in Nook's Homes, which she will share with Digby.

Isabelle is a playable character who - alongside the Villager - is part of the downloadable content pack Animal Crossing × Mario Kart 8, which was released on April 23, 2015. Her signature vehicle is the City Tripper, and she is a lightweight racer.

In the Super Smash Bros series 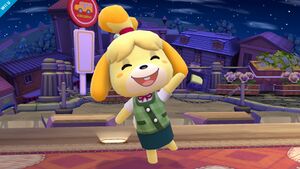 Isabelle in Super Smash Bros. for Wii U.

In Super Smash Bros. for Nintendo 3DS / Wii U, Isabelle has a plethora of roles, each of varying degrees of importance. The secretary makes an appearance as an Assist Trophy, replacing Mr. Resetti as the sole Animal Crossing series Assist Trophy. Once summoned, she tosses fruit at the player who summoned her, which heal them upon contact. However, only the summoner has the advantage of being able to recover by simply touching the fruit; the other players can heal via the fruits, but they first must pick them up and use them as if they were an item. Isabelle will react to any opponents that try to fight her, and will react disappointingly if the summoner gets KO'd.

In addition, Isabelle is a Smash Tour item that, when used, causes all the nearby stat boost items to grow to their maximum size.

A Mii Fighter costume based on Isabelle - consisting of a hat and an outfit - was released as downloadable content on June 14th, 2015. The headgear can be adorned by all three variants of Mii Fighter, while the outfit is only available for the Mii Gunner (with the standard gun being replaced with a party popper).

For Nintendo 3DS and Wii U

Isabelle is a playable character in Super Smash Bros. Ultimate. She was revealed during the September 13, 2018 Nintendo Direct, tying with the initial teaser reveal for the then-untitled New Horizons. She is marked as a semi-clone of Villager, but is not marked as an Echo Fighter, a term used in Ultimate to mark clones like Lucina. Isabelle is classified as Fighter #68.

In addition to her role as a playable fighter, her Mii Costume from Super Smash Bros. for Nintendo 3DS / Wii U returns.

In Super Smash Bros. Ultimate, Isabelle is an unlockable fighter; as such she will need to be unlocked by completing either of the following requirements:

With the exception of the last option, the player would then need to fight Isabelle on Town and City.

Isabelle has various mechanics shared with Villager, including the neutral special Pocket, her grab using a Net, her forward tilt swinging an Umbrella, her aerials firing Slingshot, her down and up aerials swinging Turnips, and a sapling pot that she drop for her dash attack.

However, there are some unique movesets for her as well. For instance, her neutral attack has her using a Toy Hammer to attack her opponents. Her forward smash fires a Party Popper and her up smash will result in her pulling up a Do-not-enter Sign.

Isabelle's Final Smash as shown in Move List in Ultimate

Isabelle's Final Smash is Dream Town Hall, acting in a similar mechanic to Villager's Dream House but dealing more damage. Isabelle first traps an opponent before Tom Nook and the Nooklings, where she pays them bells to build her a Town Hall. Once this task is accomplished, the jingle after completing a home loan in New Leaf plays, before the Town Hall explodes that causes knockback and damage to opponents.

Isabelle has two RVs in Welcome amiibo: one based on the green outfit that she wears during the spring and summer, the Town-Hall Spring Top, and one based on the yellow outfit that she wears during the fall and winter, the Town-Hall Winter Top. The RV that is summoned to the campground depends on whether the summer-outfit or winter-outfit Isabelle amiibo figurine is scanned. This affects the RV exterior appearance and determines one item inside that is different between the two: the Town-Hall Spring Top for the spring RV, and the Town-Hall Winter Top for the winter RV. 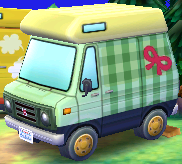 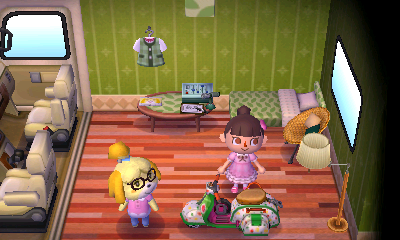 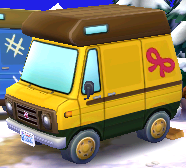 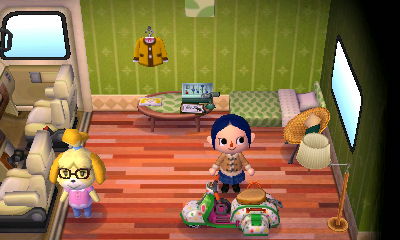 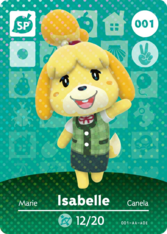 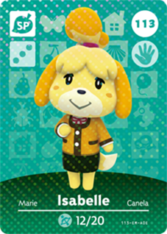 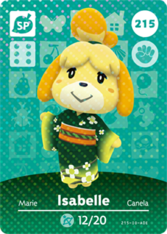 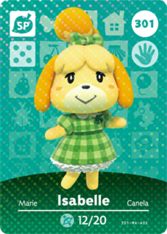 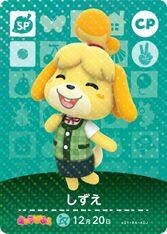 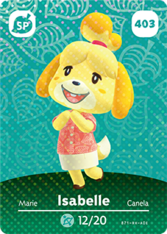 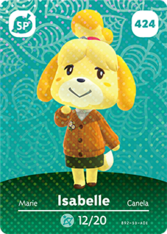 Isabelle on other wikis