Kevin is an orange pig with reddy hooves and dark brown stripes on the side of his head. He has large black dots as his eyes and black eyebrows. He has freckles on his cheeks. His ears are visibly light blue on the inside. He has a typical cartoon pig's light pink snout.

As a jock villager, Kevin will appear competitive and brotherly to the player. He will usually ask the player to participate in his contests, either catching a bug or a fish. He will appear concerned about the player's fitness, along with unintentionally offending snooty or lazy villagers, as they appear to have conflicting lifestyles. The jock personality is considered the male equivalent to peppy villagers, as a result Kevin will get along with those villagers, along with sisterly and other jock villagers. He will be easy to befriend if the player wins his contests or always takes his side when having arguments with other villagers. He will go to sleep at 12:00 a.m. and wake up at 7:00 a.m.

Kevin's house resembles a park area. His house consists of a Phone Box, two Cupid Benches and a Barber's Pole. He also has furniture from the Construction Theme, such as a Wet-road Sign, an Iron Frame, a Steamroller and a Sawhorse. He has a Tree-lined Wall as his wallpaper and a Sidewalk as his carpet. His CD Player plays K.K. Island. 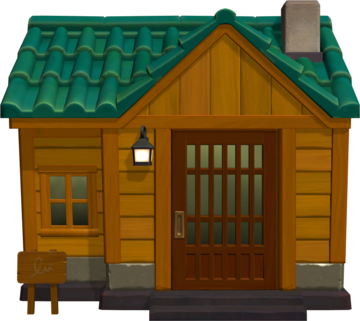