Jingle (ジングル, Jinguru, Jingle) is a reindeer character in the Animal Crossing series. He appears once a year on Christmas Eve for Toy Day, a made-up event in Animal Crossing in-place of Christmas. He delivers presents, thought to be on behalf of Santa Claus, but he is never seen handing over any presents to other villagers. He is the only way to obtain items from the Jingle series. (Read More)

Animal Crossing Switch with Isabelle by lulilolly on Instagram 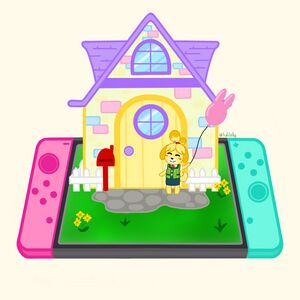 20th February, 2020
New Horizons - Nintendo has released a New Horizons-focused Direct, a roughly 25 minute "Deep Dive into Deserted Island Life".
31st January, 2020
New Horizons - A limited edition Nintendo Switch was revealed that will launch alongside the game on March 20th and include a digital download code. The North American version will launch on March 13th and is not bundled with ACNH.
10th January, 2020
Promotion - Decomposer has been promoted to the Patroller position, making him our first new staff member of the decade! Congratulations!
2nd January, 2020
New Horizons - Nintendo has released a 30-second teaser-trailer for the game, the Deserted Island Getaway Package Primer.
18th November, 2019
Promotion - sunmarsh has been promoted to Editor in Chief of Nookipedia. Congratulations!

Here are the events occurring in February:

Today is Avery's birthday!
More on Avery...
Want more? See the list of all birthdays in New Leaf