Main Street (商店街, Shōtengai?, Shopping District) is a location introduced in Animal Crossing: New Leaf. It is a shopping district located to the north of every player's town, and is accessed by going across the train crossing. Initially the street is sparsely populated, with several dilapidated buildings. As the town is improved, and after certain prerequisites are met, additional facilities will become available to the player and the background music can change. Main Street is similar in concept to the city featured in Animal Crossing: City Folk.

At the beginning of the game, only the Able Sisters, Nookling Junction, Nook's Homes, the Post Office, the bottom floor of the museum, and the Photo Booth are available to the player for use. All other facilities must be unlocked and constructed. The locations of all buildings are fixed, excluding the museum, which will be found on either the western or eastern end of the Main Street.

A different Main Street is featured as the setting of Animal Crossing: Happy Home Designer. The player can design various different facilities for the town, such as shops, a school and a hospital. Villagers will roam the area and make use of the facilities, while the player can offer to build and design houses for the villagers. 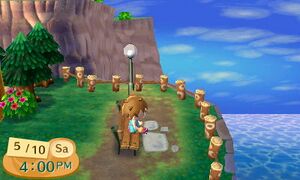 A player sitting on the bench overlooking the sea.

Main Street always has the same appearance and layout in every town, except for the eastern and western ends of the street, which will differ depending on the direction of the town's layout. The Museum will be located on the landlocked end of the street, while a bench will be placed near the cliff edge facing the sea. Yellow birds will appear on the ground at either end of the street, and will fly away when the player approaches. Before the Garden Shop is constructed, the site has an upturned garden pot which players can sit on.

Although the area has trees, shaking them will never produce any items, and neither the trees nor bushes can be removed by the player. It is not possible to use the Axe, Shovel or Megaphone in Main Street. The Fishing Rod can be used in the pond next to the Museum, and the Net can be used at any time, but there are no fish and insects that can be caught. 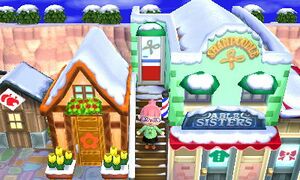 The Able Sisters, with Shampoodle above, and the Garden Shop to the left

The Able Sisters, run by Mabel and Sable, are tailors who sell a variety of clothing as well as allowing the creation of custom patterns. In an adjacent room, Labelle sells hats, accessories and umbrellas.

Club LOL is owned by Dr. Shrunk, who will teach emotions to the player, if the player brings him food. Also, K.K. Slider performs as Club LOL's DJ, and acts as the club's DJ every night except Saturday, which is when he performs with his guitar.

The Dream Suite is a building run by Luna, a tapir, and allows the player to access the towns of other players. In order for the Dream Suite to be constructed, Isabelle must be talked to when she is found sleeping at her desk in the town hall. Upon doing so, the secretary will suggest that a Dream Suite should be constructed, and begins to offer it as a project.

After receiving 20 fortunes from Katrina during her visits, she will express a wish to open up a permanent business in Main Street. All fortunes must be received by players in the town or they do not count towards getting Katrina's permanent business. This shop allows the player to receive fortunes more frequently, and buy items for 10,000 Bells that remove the effects of bad luck.

Unlike previous games, the general store is run by Timmy and Tommy Nook instead of Tom Nook. The store sells a variety of goods including furniture, tools and stationery. The store has five stages of growth, beginning as a simple shack known as Nookling Junction, and culminating into a sprawling department store through upgrades. T.I.Y will incorporate the Garden Shop, and T&T Emporium will feature GracieGrace on the third floor.

The Garden Shop is run by Leif, who sells flowers, trees and gardening tools. As the general store expands, Leif will merge his business with the Nooklings' and begin to sell an expanded selection of garden goods including bushes and fruit.

This is a special area of the player's town that will show other players that have been detected with StreetPass. The StreetPassed players will be wandering around their homes. The player will be able to see their Town Pass Card.

At Kicks, the player can buy shoes and socks from the store's owner, Kicks.

The town's Museum features four exhibits: Fossils, Fish, Bugss and Artwork. Initially, the exhibits are empty, but the player can donate items to the facility by giving them to Blathers. An additional floor is available as a public works project, which will contain a gift shop and four rentable exhibition spaces, which may be customized at will.

Nook's Homes is a real estate agency run by Tom Nook, who is able to construct the player's house and sells a variety of exterior modifications including doors, walls, roofs, mailboxes and fences. Lyle is also found in the agency, acting as a representative of the Happy Room Academy (now known as the Happy Home Academy).

The Photo Booth is located at the western end of the street, and allows custom pictures for the Town Pass Card. While taking their picture, players can use one of their learned emotions for a pose.

The Post Office is run by Pelly during the day and Phyllis during the night. The player can send and save letters and use the Automatic Bell Dispenser to deposit and withdraw Bells and repay loans for their house.

Located above the Able Sisters, Shampoodle is run by Harriet who is able to change the player's hairstyle and provide a Mii Mask. Fourteen days after the player's first hairstyle change, she will also provide a contact lens service, allowing eye color to be altered.

Main Street (ニュータウン, New Town?) in Animal Crossing: Happy Home Designer is different to the one seen in Animal Crossing: New Leaf, though it is the location of Nook's Homes. Initially the area consists of a small street with a fountain and several dilapidated buildings, but as the player progresses Isabelle will give them the opportunity to construct a variety of new facilities. From the left side of the street to right the facilities that can be built are the Hospital, the School, a Cafe and a Shop. The exterior of each facility can be customized from a selection of different styles, and the player is able to redesign facilities after construction. The School is the only facility that is required to be expanded, and will take on a different exterior appearance after the renovation. The player can begin a facility renovation by speaking to Digby after completing the School expansion.

After all of these facilities have been built, Main Street will expand beyond the southern cliff. This new area contains plots for a Restaurant, another Shop, an Office, and a Department Store. Once the second set of facilities have all been built, a bridge will appear over the river leading to a plot for the Concert Hall. After building the concert hall, the street will expanded to the left of Nook's Homes, containing a plot for the Hotel. A road from Main Street leading to the town can be found northwest of Nook's Homes, however it is not possible to venture along it. Villager houses can only be accessed by selecting them from the Client List, at which point the player will drive to their house.

Random villagers will explore Main Street, occasionally carrying shopping bags or other items. Villagers who appear to be deep in thought can be approached by the player to reveal their home design requests, and the player can offer their services to them. Villagers can also be found within each facility, with some working as uniformed staff and others as patrons, students, or patients.

The red and white car belonging to Nook's Homes is one of the few vehicles seen in the series, alongside Gracie's car, Kapp'n's taxi, and the bus to the city.

Main Street's music in New Leaf was composed by Manaka Kataoka.[1] The theme changes depending on how many shops have been built, with variants for rainy and snowy weather.