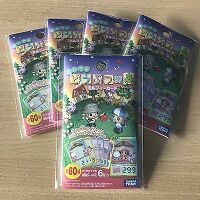 Packs used to contain 6 random semi-transparent cards, depicting either a random object from Animal Crossing: Wild World, villagers, players, or even characters from the film. Sometimes, packs could contain non-transparent base cards, intended to work as a background for the other cards.