Difference between revisions of "O'Hare"

O'Hare is a smug rabbit islander in the Animal Crossing series who originally appeared in Animal Crossing under the cranky personality. O'Hare's name is derived from a hare, an alternate name for a rabbit, and the Irish surname O'Hare. His initial catchphrase, "amigo," comes from the word for "friend" in Spanish and Portuguese.

O'Hare is a dark brown rabbit with orange hair, a green nose and green on the insides of his ears. He also wears a yellow straw hat with a black trim, something also worn by several other male islanders. O'Hare also has black eyes that appear to be frowning, giving the appearance of a cranky villager (Which, fittingly, was his personality before Animal Crossing: New Leaf).

Originally, O'Hare had a cranky personality. He later has a smug personality when he returned in Animal Crossing: New Leaf.

In Animal Crossing, O'Hare has a cranky personality. He will have the tendency to be belittling towards those around him, finding peppy villagers too happy and conflicting against lazy villagers. When talking to other cranky villagers, he will get involved in deep conversations, usually about trivial matters like the weather or other villagers and the way they act. For some reason he enjoys gardening, and will soon be involved in fishing and Bug catching.

In Animal Crossing: New Leaf O'Hare is a Smug villager, meaning he will come off as a gentlemen and polite. Smug villagers seem to be a mix between the jock and lazy personalities, and are kind, lively but can come off as conceited. They will occasionally flirt with the player, regardless of gender. Smug villagers cannot be a starter villager, and can only move in after the player becomes mayor. They wake up at 8:30 am. O'Hare will find it very easy to get along with lazy, normal, peppy and other smug villagers. Cranky villagers, however, may be difficult for him to get along with.

As an islander, he is allergic to peaches. Feeding him a peach will reduce the likelihood of him dropping money bags. He loves oranges.

In Animal Crossing, O'Hare's house at first lacks any furniture, similar to all other islander houses. He will request from the player a Blue Bookcase, a Computer, a Gold Stereo, a Kiddie Bookcase, a Ranch Bookcase, a Regal Bookcase, a Writing Chair, and a Writing Desk. 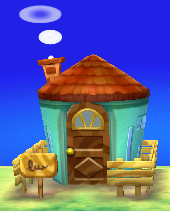 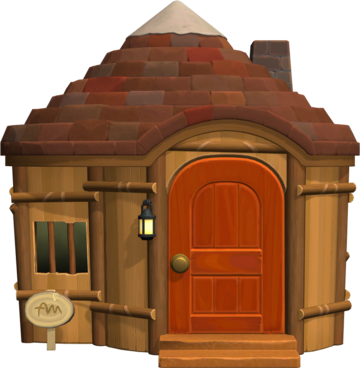