Difference between revisions of "Olivia"

This article is about the cat villager. For the cub villager with a similar name, see Olive.

Olivia is a snooty, cat villager in the Animal Crossing series. Her name, Olivia, may refer to olives because an olive has a hard pit on the inside, and is somewhat bitter on the outside. This means that Olivia is hard and soulful on the inside, but can be bitter and mean on the outside. She has appeared in every game of the Animal Crossing series.

Olivia will appear in the upcoming Animal Crossing: New Horizons.

Olivia, like Mitzi, is a white Siamese cat with no visible nose. She has a beauty mark on her left cheek, and has large, sophisticated cat eyes, with lilac purple eye liner and eyelashes that appear to have mascara. Her sclera is yellow with thin, black pupils similar to Moe's eyes. Olivia's fur is ivory white and her ears are rouge with light pink insides. Her burgundy-tipped paws, feet, and tail match her straight, perked up ears. She has a comforting, dark crimson smile that reflects a very petite disposition.

Olivia is snooty, which means she is stuck-up and cold, but she may warm up the longer the player gets to know her, although she sometimes spaces off and will not even notice the player is there. She can be cheeky and rude, but she seems to surprise people at times. She is normally obsessed with furniture and clothes, and her house will have plenty of white furnishings from the Regal Series. She will sometimes ask the player to get some for her. As many snooty villagers, she loves Gracie Outfits. Oftentimes she will ask the player to comment on her makeup. Olivia also frequently gossips about other villagers. 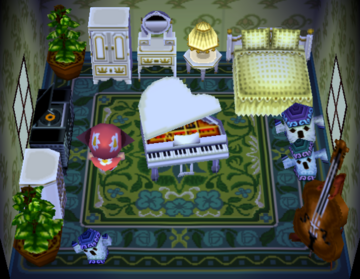 "Here I am, and not a moment too soon! Ready to liven things up, purrr?"
— Introduction from character announcement, Animal Crossing: Pocket Camp