The Sea Butterfly (クリオネ, Kurione) is a species of mollusk that live in the sea. They can be caught in the during winter and are the only winter fish that cast such a small shadow in the sea and so, can be identified easily.

The Sea Butterfly can be donated to the Museum by talking to Blathers. Below is what he says during the donation:

The Sea Butterfly is placed in the large ocean tank in the aquatic display in the back room.

It occupies a large glass tube in the lower-right corner of the fish exhibition, with other small oceanic fish. 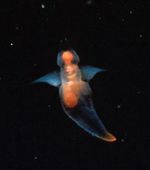