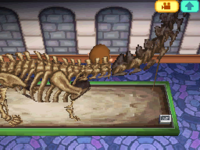 The Seismosaur in the museum in Wild World.

"Hoo! Indeed, woo HOOTIE hoo! Oh, glorious day! The seismosaur is, quite simply, a stunning creature. Of the dinosaurs that we know about now, this is the absolute longest. Its body was rather small and quite light for its length, to be honest. Ah. Hoo. Terribly sorry. Who am I to judge its weight, eh wot?"

"...Wait! Did the earth just move? Because the seismosaurus is complete! Hoo, what a mighty moment this is! The seismosaurus is the longest of all known dinosaurs, eh wot? Its body was small for its length, though, and rather light, as well... Proportionally, its brains were also rather light! HOO! I... beg your pardon! I was so enthralled, I... I spouted hot air like a boiling teapot, eh wot?"

In 🎬 Gekijōban Doubutsu no Mori, Ai, Yu, Sally, Bouquet, and Halberd stumble upon a full skeleton of a seismosaur after finding ammonite fossils in a cave. Yu decides to get the fossil to donate to Blathers, but to no avail. The cave begins to collapse, and after they escape, the cave is sealed, inhibiting them from entering again. Later, in the winter, Ai and the others attempt to go into the cave in order to find a UFO part, and are about to lose hope when Sally comes from behind to help move the rock blocking the entrance of the cave. After going into the cave, Yu climbs on top of the seismosaur and retrieves it.

Seismosaurus hallorum was first described as a diplodocid in 1991, but in 2015, a new analysis of related dinosaur genera concluded that there were not enough differences to warrant a separate genus name, and reclassified the dinosaur as Diplodocus hallorum. At 32 meters long, it is slightly larger than the other species of Diplodocus, D. carnegii.