Difference between revisions of "Sisterly"

"She's like a strong older sister you can always rely on! No matter what, she'll have your back!"
— Isabelle, talking about a sisterly villager, Animal Crossing: New Leaf 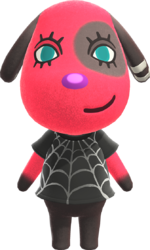 Sisterly[nb 1] (also known as big sister[nb 2] or uchi[nb 3]) villagers are a type of female character introduced in Animal Crossing: New Leaf. Prior to New Horizons, this personality was most commonly referred to by the English speaking community as the Japanese word "Uchi", which refers to the personal pronoun these characters use in the Japanese version.

The personality is similar to the Cranky personality in previous Animal Crossing games, coming across as blunt, rude, and belittling to others, but also caring and empathetic deep down. They are thus considered the female counterpart to cranky villagers. They wake up at 11:00 AM in New Leaf, or 9:30 AM in New Horizons, and go to bed at 3:00 AM. There are currently 24 sisterly villagers, 5 of which appeared in the previous games with a different personality; sisterly is thus the least common personality.

Sisterly villagers are often depicted as stubborn, rude, and easily offended at first glance, in a similar manner to cranky villagers, who also have a hostile behaviour. Sisterly villagers also speak with gruff, accented voices, similar to the deep voices cranky villagers use, in reference to their "tough" attitudes. As a result of this, they are seen as a sort of tomboy, as they occasionally talk about enjoying fighting, and express an interest in participating in 'turf wars'. In addition to this, they might give the player a petition called 'Tomboys Are People Too' which further supports this. Despite this violent exterior, however, sisterly villagers are kind and empathetic deep down. They may act like an older sister when befriended, and may even give the player medicine (or in New Horizons, the DIY recipe for it) if talked to after being stung by Bees or Wasps.

In Animal Crossing: Happy Home Designer sisterly villagers lose most of the empathetic and sisterly charm of their personality to embrace instead a more tomboyish, tough, mischievous and sarcastic inclination. As such, more than the "big sister" stereotype, they seem more akin to a somewhat watered-down image of the Japanese sukeban, or "boss girl". Natural partygoers and thrill-seekers, sisterly villagers despise boredom and show little concerns for social conventions - eager to shout while waiting for food in the restaurant and presenting themselves as the classic loafer and cocky student at school, or joshingly asking the player to switch roles while working at the shops. However, they still show traces of their caring nature, worrying for the player's health and questioning their busy schedule if talked in their homes.

In the Japanese version of the series, sisterly villagers speak with the Kansai region's dialect, which is distinguished from the standard Japanese dialect by elongated vowels and differing pitch intonations (emulated in their Animalese vocals). The Kansai dialect also has somewhat different grammar from standard Japanese, such as the usage of "uchi" as a personal pronoun; the English localization replicates this by having sisterly villagers use slang such as abbreviating "-ing" to "-in'" and "them" to "'em".

Below are some (not all) quotes made by sisterly villagers.