At the beginning of each game in the Animal Crossing series, the player will move into a town or village where the game takes place. The first person to load the game is given the task of naming the town, and this cannot be changed after creation, until they rebuild the town. However, additional players can move into town, with a maximum capacity of four human residents.

Player houses (all games) - These are where the human players in town live. Each house can be furnished to that player's desire, and they are often inspected by the Happy Room Academy. In Animal Crossing, there are four of these, all located in acre A-3, forming a square shape. In Animal Crossing: Wild World, there is only one, which all players share. In Animal Crossing: City Folk and Animal Crossing: New Leaf, each player has their own house once again. Houses can be expanded by paying off the loan owed to Tom Nook, which will give the player more space inside to furnish their home.

Villager houses (all games) - Villagers live in these, and the player can usually only enter them when the villager is inside. Each villager house is furnished differently, but the player can possibly influence and alter this. Houses owned by villagers usually appear on top of signposts, and when a villager moves out, their house will vanish completely.

Buildings (all games) - Shops and other major buildings, such as the Town Hall or Museum, are usually present in town. They provide the player with some of the main services in the town, such as the ability to buy and sell items. In Animal Crossing, their locations are pretty firmly set, but later games have building in seemingly more random positions. Main Street and the City also house many buildings, in Animal Crossing: New Leaf and Animal Crossing: City Folk respectively.

Cliffs (all games except Animal Crossing: Wild World) - Usually, the town will be divided into upper and lower levels, separated by cliffs. In Animal Crossing: New Leaf, the cliffs divide the town and beach instead. Access between the two tiers is provided by ramps. In Animal Crossing, it is possible to have two rows of cliffs, created a three-tier town. Also, cliffs adorn the edges of every town, and the player cannot access the areas beyond them.

Flora (all games) - The town is home to a variety of flora; many types of trees and flowers grow there, and in Animal Crossing: New Leaf, bushes and bamboo can even be grown, but manually, by the player, by purchasing bushes or bamboo from the island or T&T Emporium. Flora improves the environment rating and helps certain bugs to appear, among other benefits.

Water (all games) - Each town has a river running through it, and an ocean at the bottom of town. There are usually several holding ponds too, and a river pool and waterfall. Fish can be caught in all bodies of water, and bridges help the player to cross the river.

Public works projects (Animal Crossing: New Leaf) - The mayoral player in Animal Crossing: New Leaf can customize the town with these. They include a variety of buildings, benches, clocks, lamps, bridges, sculptures, and other features. Lloid will appear to collect the funds required to erect a public works project, and Isabelle assists the mayor with the process. There is a completion ceremony (optional) held when a project is completed. 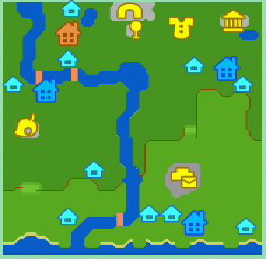 The landscape of each town varies and it is very unlikely that two towns will be the same. Towns are semi-randomly generated, with each town being made up of smaller acre 'pieces'.

In Animal Crossing and earlier

The town is 30 acres in size; 5 across and 6 down. Acres are more visible than in later games. At the top, there are railway tracks and the Train Station. There will also be at least one cliff running approximately horizontally through the town, which the player can climb using ramps. Sometimes, there are two cliffs, creating a three-layer town. Animal Crossing has more rigid locations for buildings than later instalments: the Train Station, Tom Nook's store and the Post Office will be in the A-acres, with the player's house being in acre A-3. The Police Station, Museum and Wishing Well will be the C, D or E acres, while the Able Sisters and the Dock will be near the beach.

Tortimer will allow for a third bridge to be built when the town reaches the maximum of 15 villagers, increasing convenience in crossing the river.

Animal Crossing: Wild World has the smallest town size, at 16 acres (4x4). Unlike Animal Crossing, there are no cliffs, either. Grassy areas are less abundant, which creates more of a desert-like feel. Also, Tom Nook's store will always be next to the Able Sisters.

The river will sometimes branch off in a two-pronged fork, creating an islet in the village. An islet must have a signpost or villager's house on it.

Animal Crossing: City Folk towns are more like Animal Crossing ones, and are 25 acres (5x5) in size. Cliffs and ramps return (although there are no three-tier towns), and the Able Sisters is separate from Tom Nook once again. However, islets from Animal Crossing: Wild World are retained.

The town starts almost completely full of grass, but this will be decreased over time through grass deterioration.

If the player donates enough Bells to the Town Fund, additional features such as an extra bridge, a fountain, a windmill or a lighthouse can be built.

At 20 acres in size, Animal Crossing: New Leaf has medium-sized towns, although the landscape has changed slightly. The beach now takes up two of the town's sides, while the top of the town has railway tracks and Main Street. The beach has a dock to take the player to Tortimer Island. Cliffs separate the town and beach, but islets are absent this time. Also, grass deterioration returns, but is not as damaging as in Animal Crossing: City Folk.

One significant change from earlier instalments is the lack of signposts. Instead, villagers will move in anywhere where there is space, sometimes destroying trees or flowers in the process.