Not to be confused with the Harvest Moon Festival.

Turkey Day, known as the Harvest Festival prior to New Horizons, is an event in the Animal Crossing series that occurs on the fourth Thursday in November (2020 date: November 26), coinciding with Thanksgiving in the United States. During the event, a banquet is set up with food, and Franklin the turkey makes an appearance, allowing the player to acquire unique items themed around the event.

In Animal Crossing and City Folk, the Harvest Festival involves the player bringing silverware to Franklin, who hides around town, afraid of being eaten by Tortimer and the villagers. In New Leaf and New Horizons, Franklin is instead the head chef of the event, tasking the player with bringing him ingredients to create various dishes with.

The Harvest Festival in Animal Crossing.

Franklin meeting the player during the Harvest Festival in Animal Crossing.

While not present in Doubutsu no Mori or the original Japanese release, the Harvest Festival appears in international versions of Animal Crossing and in Doubutsu no Mori e+. During the Harvest Festival, from 3 PM to 9 PM, Tortimer and several villagers appear near the Wishing Well alongside three tables of food. If spoken to, Tortimer gives the player a Cornucopia. He then says he is thinking of having "that new fellow," Franklin, over for dinner.

Franklin can be found in a random acre hiding behind a tree or building, and his general location is hinted at by villagers if spoken to. Franklin is initially scared by the player, thinking they are there to eat him. He explains that Tortimer sent him an invitation to be the "main guest," with guest being written over the word dish, among other things that imply he is meant as the main course for the Harvest Festival. Franklin then tasks the player with collecting the Knife and Fork from the main table at the banquet so he cannot be eaten. If the player brings it to Franklin, he rewards them with an item from the Harvest Series. More Knife and Fork sets can be brought to Franklin, who appears in a different hiding place each time, and he will give the player another item from the Harvest Series.

The Harvest Festival in City Folk.

During the Harvest Festival in Animal Crossing: City Folk, two tables are set up outside Town Hall and Tortimer appears, giving the player a Knife and Fork if spoken to. The Knife and Fork can be given to villagers, who will, in turn, tell the player they have seen Franklin hiding around town, and they tell them his general location or what type of object he is hiding behind. If the player returns to Tortimer, he gives them another Knife and Fork, telling them to give it to a specific villager; however, it can be given to any villager who has not already been given one, and they will give another hint toward Franklin's location. 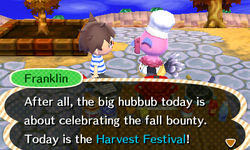 Franklin telling the player about the Harvest Festival in New Leaf.

In Animal Crossing: New Leaf, Franklin appears in the event plaza as a chef, and he asks the player to bring him ingredients for his dishes. He makes a total of four dishes: one salad, soup, main course, and dessert, with each having three main ingredients and one secret ingredient. A total of five dishes exist for each type, making for a total of twenty possible dishes. The ingredients Franklin asks for include fruit, mushrooms, fish, sea creatures, Beehives, or five unique items: Flour, Vinegar, Milk, Butter, or Sugar. The ingredients can be obtained from indoors villagers, who will ask for a fish in exchange for the ingredient, followed by a hint for the secret ingredient of one of the dishes. 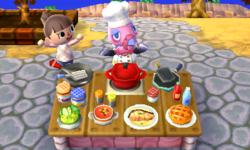 All of Franklin's dishes in New Leaf.

Below is a list of all dishes Franklin can make in New Leaf, alongside their recipes and secret ingredient.

While initially absent from Animal Crossing: New Horizons, the Harvest Festival, now known as Turkey Day, was added in the 1.6.0 Free Winter Update.[1] Isabelle refers to the event as a day to celebrate either the fall harvest (Northern Hemisphere) or the blooming of spring (Southern Hemisphere). On Turkey Day, a feast is set up in the Event Plaza from 9 AM to 12 AM, and Franklin appears as the head chef, tasking the player with gathering ingredients for him to create the event's dishes with. If the player helps him, he will reward them with unique items.

Ingredients for Franklin's dishes include fish, sea creatures, pumpkins, and Manila Clams, which, in addition to their usual methods of obtainment, can be received from villagers. Villagers who are in their houses are cooking and will ask the player to retrieve their last missing ingredient for them, which is always a fish or sea creature. Once they receive the ingredient, they will give the player a random ingredient for one of Franklin's dishes as well as a hint as to what the current secret ingredient is.

All of Franklin's dishes in New Horizons.

Below is a list of all dishes Franklin can make in New Horizons, alongside their recipes and secret ingredient. Note that some ingredients differ between hemispheres based on the seasonal availability of the items.