It originally had a suggested retail price of US$249.99, before August 12, 2011, when Nintendo introduced a price drop to US$169.99, with consumers who bought the system at its original price gaining access to ten Nintendo Entertainment System games as well as ten Game Boy Advance at no charge.[2] The Nintendo 3DS ran until its discontinuation worldwide on September 17, 2020.[3] 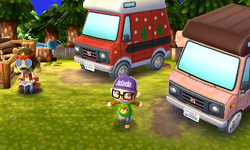 An example of the Nintendo 3DS graphics as seen in Animal Crossing: New Leaf - Welcome amiibo

The Nintendo 3DS has many new features. It is capable of glasses-free 3D on its top screen, which has been expanded width-ways. The 3D effect can be increased or turned off entirely with the slider located on the right-hand side of the top screen. Nintendo has recommended that children under 6 are not permitted to use the 3D effect, which can be locked off with Parental Controls,[7] however the American Optometric Association has stated that 3D gaming on the Nintendo 3DS will not harm children's eyes, if used in moderation.[8]

The console includes 'augmented reality' cards, which one places on a flat surface and uses the Nintendo 3DS camera to view. The cards are then transformed into an object which is visible through the 3DS camera. Nintendo has stated that users "are not to be surprised if they see a dragon coming out of their kitchen table."[9] An example card is a game in which players are required to shoot targets surrounding objects.[10] The Nintendo 3DS includes a gyroscopic sensor that registers movement, similar to that of the iPhone and iPod Touch.

The Nintendo 3DS has the standard A, B, X, Y, Start, Select, L and R buttons, as well as the D-Pad. It also has the Circle Pad, an analog stick, and a Home button.

Similar to the Wii's Wii Address Book, the Nintendo 3DS has a function named the Friend List, where people are able to see which of their friends are currently online and their status messages. The Notification LED will light orange when a friend is online.

SpotPass is the ability for the 3DS to seek Wi-Fi signals and automatically download content while in sleep mode. It may be used for players to download distributed items in Animal Crossing: New Leaf. StreetPass is the ability to connect with other 3DS systems while in sleep mode. A widely cited example is that passing 3DS systems in the street is able to send Miis to each other.

Friend Codes remain in the 3DS system's software, however, only one is needed per system, as opposed to the Wii and DS's one each for every game.

The Activity Log tracks both game play (noting which games have been played and for how long) as well as physical activity (counting every step taken while carrying a 3DS). The feature encourages walking more every day to earn Play Coins, which can be used with compatible games and applications to acquire special content and a variety of other benefits.

The two external cameras are used together to create 3D photos, however the interior camera can capture 2D photos and 2D videos.

The game Face Raiders is automatically built into the Nintendo 3DS. In it, the player uses the 3D camera and Augmented Reality to shoot faces which have been taken from photos captured with the 3D cameras.

A play coin is an alternative form of currency in various Nintendo 3DS games, obtained by walking with the Nintendo 3DS while the system is in sleep mode. For every one hundred steps taken, the system will add 1 coin, for up to 10 coins per day and for a maximum of 300 coins. In Animal Crossing: New Leaf, fortune cookies can be bought for 2 play coins, and in Animal Crossing: New Leaf - Welcome amiibo, play coins can be used to recruit villagers or restart in Desert Island Escape.

On June 7, 2011, the Nintendo eShop became available, allowing users to download digital copies of games as well as collection of older titles via Virtual Console and DSiWare.

In addition to the downloadable versions of the retail Nintendo 3DS titles mentioned above, the following download-only software are also playable on the Nintendo 3DS.

The 2DS is the seventh, newest portable console, also the newest Nintendo console. Since the console's main market audience is younger children and that Nintendo believes that stereoscope 3D can damage children's eyes, there is no stereoscopic 3D feature. There is also no hinge, so it is unable to close. Unlike closing the lid to have it go to sleep mode, a feature for the previous 3DS and DS, there is a switch for sleep mode. The Nintendo 2DS was released in October 2013.

In addition to having a more powerful CPU, the New Nintendo 3DS features an improved 3D effect, using the system's gyroscope and cameras to track the location of the player's eyes to sustain the 3D effect. An NFC sensor is built-in under the bottom screen, allowing compatibility with the amiibo line of products without needing the stand peripheral. Two additional shoulder buttons (ZL and ZR) have been added, alongside a second smaller circle pad above the ABXY buttons, the same features added to a standard Nintendo 3DS or 3DS XL with the Circle Pad Pro. The Start Button and Select Button buttons have been moved under the ABXY buttons, similar to the Nintendo DS Lite and DSi. In addition, the cartridge and stylus slots have been moved to the bottom of the handheld, and the SD card slot has been replaced by a microSD slot on the back of the system which can be accessed by removing the bottom cover.

A new version of the Nintendo 2DS was released in July 2017. It features screens 82% bigger than the regular 2DS, as well as built-in amiibo compatibility, a more powerful CPU, and the new buttons and control stick already featuring on the New Nintendo 3DS. It retails for $149.99 in the United States.[12]

3DS themes are themes that can be applied to the HOME Menu of any Nintendo 3DS. Themes are typically bought; otherwise, some of them are available through the My Nintendo rewards program, or for free for special events.

In the Animal Crossing series[edit]

Nintendo 3DS on other wikis