In Donkey Kong Country: Tropical Freeze, one of Donkey Kong's idle animations is pulling out a blue 3DS XL with sound effects being heard from one of four random 3DS games. One of these games is Animal Crossing: New Leaf. He can be heard either starting up the game, coming out of a house, or digging something up. This is removed from the Nintendo Switch rerelease.

An Isabelle costume was added to the Nintendo Switch game Jump Rope Challenge in an update on July 1, 2020.

In Kirby Super Star Ultra, there is a subgame called "The Great Cave Offensive". The objective of it is to escape with the most items possible, and some of these items are references to other games from Nintendo. One of these items is the Gold Watering Can, an obvious reference to the Golden Watering Can.

In The Legend of Zelda: Phantom Hourglass, the Postman asks Link not to shoot him down with a slingshot. This could be a reference to Pete in Wild World.

For the release of Animal Crossing: New Leaf in 2013, Style Savvy: Trendsetters has released two downloadable brands for their character in-game. One called "Club LOL" based on Club LOL, and "GracieGrace" based on Gracie. In the PAL version Nintendo Presents: New Style Boutique, the Club LOL inspired brand is called "Club Design" and Gracie's brand is "Giraffissima". The Japanese version has Club 444 instead of Club LOL, as it's the name of the club in-game.
The Club LOL brand has one item, DJ KK Concert Tee. It was available for download in June 2013.
The GracieGracie brand has five items - Beret, Sunglasses, Slip Dress, Hangbag and Tall Boots. It was available for download in May 2013. 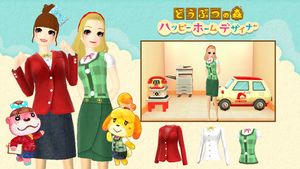 To celebrate the release of Animal Crossing: Happy Home Designer in 2016, a special set was released for download. It includes two clothing items inspired by Lottie - Lottie's Jacket and Lotties' Blouse, and a shirt inspired by Isabelle - Town Secretary Shirt. Besides clothing items, three doll house items are included as well - Nook's Homes Company Car, Nook's Homes Photocopier and Nook's Homes amiibo Phone. These items are available for the Japanese, European, and Australian versions of the game. This game also has amiibo support - scanning the Isabelle amiibo or amiibo card gives an opportunity to be gifted the Town Secretary Shirt from a customer. This method of obtaining the Town Secretary Shirt includes four additional color variants and is only available in the Western versions of the game. In all versions, any other amiibo unlocks the Star Hairpin, including those of Isabelle in the Japanese version's case. 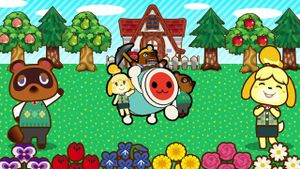 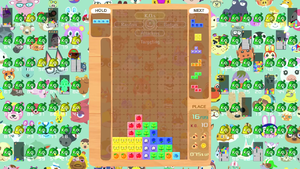 The Animal Crossing theme in Tetris 99

During the 9-Volt level in WarioWare: Smooth Moves, one microgame, named Animal Crossing: Wild World, involves the player controlling a fishing Animal Crossing: Wild World character (either a male or female, depending upon the player's gender). The player must pull up the Wii Remote in order to catch a fish from the river. There are three difficulty stages to this game:

In Wii Fit Plus, there is a game called Segway® Circuit. The player has to stop moles from taking beach balls with a pet. The moles appear to resemble Mr. Resetti.

References to other Nintendo games in the Animal Crossing series[edit]

From March 16, 2020 to June 16, 2020[1], to promote the release of Animal Crossing: New Horizons a partnership with social media Twitter for a custom emoji features Tom Nook that appeared for a limited time for the following hashtags:

On July 3, 2020, a custom emoji features Isabelle is also here to promote the release of the 1.3.0 summer update and Isabelle's return as "account taker". However, #Isabelle will not trigger the emoji, but #TomNook does. This was removed later.