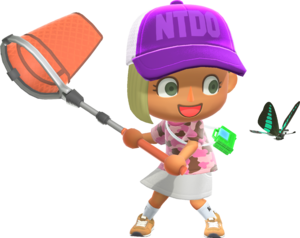 Using the net will cause it to swing in front of the player. If the net strikes an insect, the player will successfully catch it. Striking flowers will cause the petals to fly, though it does no actual damage to them. Striking a villager three times with a net will prompt an immediate reaction (the villager tells the player to stop doing it) and make them angry or upset. The player can also hit the net on a fish shadow and it will swim away.

More advanced versions of the net can also be obtained. The Silver Net and Golden Net are larger than the standard net, increasing their range and making it much easier to catch insects.

Nets in New Horizons will break after a specific amount of uses. Making a successful catch with a net, whether that is an insect, one of Wisp's souls, a cherry-blossom petal, maple leaf, or snowflake, will reduce its durability. A net's durability is not reduced when swinging the net or failing to catch anything.