The Clown Fish (クマノミ, Kumanomi), known as the Clownfish prior to Animal Crossing: New Leaf, is an orange fish with white stripes. It can be found in the sea and has a tiny shadow size. The Clown Fish appears all day from April to September and sells for 650 Bells. There is a variant in Animal Crossing: Pocket Camp called the Black Clown Fish that appears during a Fishing Tourney.

"I caught a clownfish! Who's laughing now?"

I caught a clownfish! Who's laughing now?Apr - Sep: All DayMay - mid-AugClownfish spend life protected by anemones. All clownfish start life as males.SeaTiny15 cmCommon650Unknown6501.0x1.0 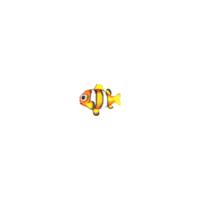 "I caught a clownfish! Where's your red nose, hm?"

"I caught a clown fish! Who's laughing now?"

"I caught a clown fish! How many can fit in a carfish?"

Blathers will say the following once the fish has been donated to the museum:

"The clownfish usually finds solace within the fronds of an anemone, wot? These fish are fairly hearty and easy to breed, so they're quite common. If you're going to raise one as a pet, I recommend that you buy an anemone with it!"

It can be found in the sea tank at the back of the aquarium, swimming in the area around the anemones on the left side of the exhibit.

"Clownfish go hand in hand with sea anemones, wot? A single clownfish family will take up residence in each sea anemone. Occasionally the clownfish will share some of its food with its landlord... All in all, it's a wonderfully amiable little fish who really knows how to treat its neighbors!"

It can be found in the small tank on the right hand side of the aquarium, sharing its tank with the Sea Butterfly and Surgeonfish.

"Clown fish spend their lives hiding among the feelers of sea anemones, a place only they can live. Their homes may be dangerous, but they produce a special coating that protects them from the poison. In exchange for the anemone's protection, the clown fish chases off any parasitic bugs and enemies. Curiously, all clown fish are males when they're young but change into females if necessity demands."

"Few can deny the delightful qualities of the clown fish. These vibrant fishes make their home among venomous anemones. It's a mutually beneficial arrangement. The clown fish finds safety in the anemone's wriggling arms, as well as leftover scraps of food. In return, clown fish ward off parasites and predators for the anemone. Thus these colorful fish remind us of the importance of maintaining good cheer among our roommates."

Chip will say this when given a Clownfish:

"I've heard clown fish go great grilled up with salt, but I've never had the chance to try them. Maybe it's because I'm too quick to just munch 'em raw!"

Clownfish are native to Indian and Pacific water and can be found in the Great Barrier Reef and the Red Sea. They are usually paired with Surgeonfish and Butterflyfish when sharing tropical and reef aquariums. The species of clownfish featured in the Animal Crossing series is the common clownfish (Amphiprion ocellaris) which is the most recognizable clownfish and the one most likely found in commercial aquariums. They are usually peaceful, but have been known to attack each other. As mentioned by Blathers in City Folk, it holds a strong bond with sea anemones, using them as a home and place of shelter. Although sea anemones are toxic, they fail to poison clownfishes, because they have a mucus lining on their skin that protects them. The clownfish and the sea anemone feed each other respectively, with the clownfish feeding on undigested matter left by the sea anemone and the sea anemone eats what the clownfish excretes. Wild clownfish are very rarely caught to be used in private and public aquariums; they are now tank-bred, which insures they are more immune to diseases and less stressed when introduced to aquariums.