Tortimer Island is a tropical island south of the player's town in Animal Crossing: New Leaf. The island is accessed via a boat ride by Kapp'n from the town's dock. On the island is an interior lobby where Leilani, Leila, and Grams reside; the player can register for minigame tours, purchase exclusive items, and sell items in the lobby. Outside is a circular island where the player can catch bugs, fish, and sea creatures. The climate on the island is always summer. 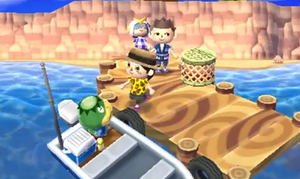 Once unlocked, the player can speak to Kapp'n at the dock to take a trip to the island for 1,000 Bells. All items in the player's pockets are held by Kapp'n until returning to town. Up to four players (either residents or visitors) can visit the island.

Inside the lobby on the island resides Kapp'n's family: Leilani, who lets the player go on minigame-like tours or travel back to the mainland; Grams, who runs a shop that sells exclusive items; and Leila, whom the player can sell items to. Additionally, there is an ABD in the building where the player can deposit and withdraw Bells.

A guide to the island's various features is located on the left-hand side of the tour counter where Leilani resides.

Items received on the island must be placed in the Items Drop-Off Box, located next to Leilani, to be brought back to the mainland. Up to 40 items can be placed in the Items Drop-Off Box, and there is a corresponding box at the town's dock where the items can be collected upon the player's return. Any items left in the player's pockets upon returning to the mainland will be sold at Leila's rate of 5% of the standard sell price. 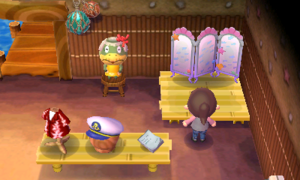 The Souveneir Shop is operated by Grams and sells four exclusive tropical- or island-themed items each day. Items are paid for with medals, and they are automatically sent to the Items Drop-Off Box upon purchase.

The following items can appear at the Souvenir Shop:

The player can speak to Leila to "play supermarket," where items can be sold to her for 5% of their standard sell price. 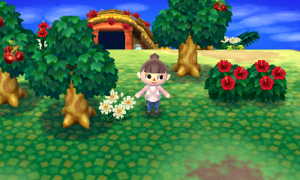 The grassy center of the beach area

The outside of Tortimer Island consists of a grassy center surrounded by beach. By default, exotic fruit trees,[nb 2] hibiscus bushes, and flowers are in the grassy area, while either Coconut or Banana trees line the beach. Additionally, shells spawn on the shore each day.

Lloid appears near the entrance to the building and lets the player borrow rental tools.

Club Tortimer is a feature that allows the player to meet at a version of Tortimer Island with other random players online. The application form for Club Tortimer can be purchased from the island shop for 50 medals. When playing online via Club Tortimer, the Souvenir Shop can sell exclusive items not available in singleplayer.