From Nookipedia, the Animal Crossing wiki
(Redirected from Coconut Palms)
Jump to navigation Jump to search

Trees are common flora in the Animal Crossing series. Some trees bear fruit while others are just for decoration. Certain insects can be found in or on trees, depending on the season and time of day. The number of trees will affect the environment of a town and are used to determine perfect town status. With the exception of perfect fruit trees in Animal Crossing: New Leaf, fully grown trees do not die until they are chopped down by the player, leaving behind a stump.

Saplings are baby trees available for purchase at Tom Nook's stores and the Garden Center. Not all trees grow successfully, due to poor soil quality and placement. If the player plants a tree where a different tree was cut down then it will have a much higher chance of growth. If the player stands on a tree sapling at exactly 6 a.m., the tree will grow around the player and knock them out, as though they had been bitten by a Tarantula or Scorpion.

Cedar trees are evergreen trees. During December, particularly around Toy Day, and during the Bright Nights in Animal Crossing: Wild World, Cedar trees are decorated with bright lights. Cedar trees will only grow in the top two acres of the village, reflecting the fact that their real-life counterparts are found more frequently in the Northern Hemisphere, being adapted to colder temperatures.

Oak trees are generic trees, resembling fruit trees but bear nothing. Their appearance differs seasonally, turning golden brown in the autumn, being snow-laden in the winter, and bearing cherry blossoms during the Cherry Blossom Festival in April.

Fruit trees resemble Oak trees but bear fruit, three at a time. During the Acorn Festival they also bear acorns. There are 5 different varieties of fruit trees (13 in New Leaf), one for each type of fruit. The player can receive non-native fruits in letters from Mom or from other villagers, after which they can then be grown into a fruit-bearing tree.

Palm trees bear coconuts (or alternatively bananas in New Leaf), which are special types of fruit; however, they only produce two instead of the usual three fruits. Some beetles, such as the Goliath Beetle, will appear only on palm trees as well. In New Leaf, palm trees can be found on Tortimer Island, and in New Horizons on the Mystery Islands.

In Wild World, giving Wendell a coconut to eat will prompt him to give the player a unique design.New Leaf

Palm trees can be grown by burying a coconut near the beach, on the grass within ten spaces of the shore. However, in New Leaf and New Horizons, palm trees are grown only in the sand. In Animal Crossing, coconuts can be obtained from the island, and in Wild World and City Folk, coconuts will wash up on the shore about once a week. In New Leaf, coconuts and bananas can be obtained on Tortimer Island.

Money trees are a rare variety of tree that bears money as its fruit. They can be grown by burying bells in the ground with a golden shovel. In Animal Crossing, the player can grow a money tree by burying bells in the daily glowing spot instead. To maximize potential return and minimize expected loss, the ideal amount to bury is 30,000 bells.

Shaking trees may give more than 100 bells, depending on the Player's Luck for that day. 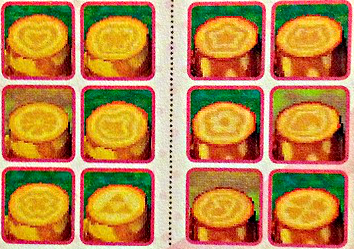