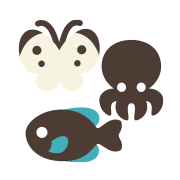 There are two pages in the Critterpedia, one page each for insects and fish, and there are 160 total possible entries (80 insects and 80 fish). With the 1.3.0 Free Summer Update (Wave 1) of the game added, a third page is added for sea creatures with 40 possible entries bringing the app's critter total to 200 entries. All entries are initially blank until the player unlocks entries by catching new species of insects with nets, fish with fishing rods, or sea creatures by diving. As critters are caught and registered into the app, the critter's data is listed in the app, with the data being the critter's seasonality, and hours active. The players will earn Nook Miles and new titles. If the player catches all the fish, they will receive a DIY recipe for a golden rod. If the player catches all the bugs, they will receive a DIY recipe for a golden net. If the player catches all the sea creatures, they do not get anything other than a congratulations from Blathers.

In New Horizons, certain species will only appear after catching a certain amount of the critter type. For example, a Vampire Squid will not appear in the game until the player has caught 80 total sea creatures of any species.