The Airport is a location in Animal Crossing: New Horizons where the player can travel between islands via seaplane. Dodo Airlines (often abbreviated as DAL) is the service that operates the flights, and is run by Orville and Wilbur. Both characters are dodos, a flightless bird species that contrast with the very nature of a flight service. The Airport fulfils a similar function to the train station in Doubutsu no Mori and Animal Crossing: New Leaf, and the checkpoint of Animal Crossing: Wild World and Animal Crossing: City Folk, as well as Kapp'n's boat rides. Just as those prior buildings can be generated in one of several different colors, the town's Airport can have either blue, green, orange or yellow walls.

The player's airport color can determine the catalog variants in Nook's Cranny and Nook Shopping.[1] 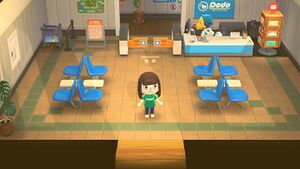 The Airport is located along the southern coastline of the player's island, mostly extending over the water. The island's flag is hoisted on a flagpole outside of the building. The airport also acts like a pier, and players are able to catch fish that only spawn near the pier. Inside the terminal is a departures lounge with eight chairs, a gate that leads to the seaplane, and a service desk. The desk is where flights to other islands can be arranged and the gate can be opened to allow outside visitors. To the right of the desk is a card stand, where letters can be composed and sent to other players and villagers for 200 Bells. This subsumes the primary function of the Post Office from previous games, which is absent in New Horizons.

The player arrives to the island via plane at the start of a new game along with Tom Nook, Timmy and Tommy, and two other villagers. The player is free to visit other players' islands whenever they wish, but require a Nook Miles Ticket to depart for the Mystery Island Tour on randomly generated islands. Each time the destination for the tour is chosen by Wilbur, and once on the island the player is free to collect any items the player wishes to take back with them. Other villagers can be found exploring the tour islands and recruited to come live on the player's own island. The tour islands are generated from a series of archetypes, and will always be in the same season as the player's island. Weather precipitation may differ from that on the player's island, but all tour islands appear to experience the same weather as each other on any given day. Since version 2.0, the player cannot fly or have visitors on the island if a day has not yet rolled over properly, and the player must leave the airport for Orville to allow usage of these functionalities.

After meeting Harvey on the island, players may choose Harv's Island as a destination from the airport. If the player downloads the Happy Home Paradise DLC, Lottie will appear at the airport if Resident Services has been upgraded from a tent into a building. The Archipelago will become an available destination after talking to her.

The player can only obtain a Dodo Airlines-related item once.