A glitch is an error in a game's programming that causes unintended behavior under certain conditions. The following is a list of glitches in each game in the Animal Crossing series.

Note that all glitch names are conjectural unless otherwise stated. 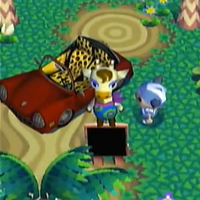 If prior to Gracie's arrival, a Sign Board is placed where she stands (one space east and two spaces south of a signpost), she will stand on top of the Sign Board. She cannot be spoken to until the Sign Board is taken down, after which she falls onto the ground and functions as normal.

If the player repeatedly attempts view another player's diary entry that is locked and repeatedly, bringing up the message saying "This diary is locked!", the game eventually crashes and resets.

If the player drops Turnips in the hut on Animal Island and does not copy the island data to the Game Boy Advance when returning to the town, the Turnips will not spoil. Additionally, if Turnips end up in the lost and found, which is possible if an NPC or building appears on top of dropped Turnips, they will not spoil.

Under certain conditions,[clarification needed] a tree can permanently stop growing before it is fully grown.

If the player pushes a snowball to the beach's shoreline and drops an item in front of it, then walks toward the snowball and picks up the item, the snowball pushes then into the sea where they can walk around. Through this glitch, the player can walk through several sea acres that would never be seen in normal gameplay, and they can walk to Animal Island.[2] If this glitch is done in Doubutsu no Mori e+ and the player visits the island for the first time, the game crashes, as the island is not loaded into the game's memory until the player visits it via Kapp'n's boat for the first time.

If the player digs up a shining spot in Acre F-5, saves and continues, resets the game, and travels to Animal Island and back, the shining spot reappears. 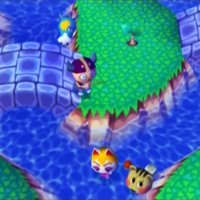 Ed, Monique, and Sally in a river due to the villagers out of bounds glitch

For a short period of time after being hit with a net, villagers can pass through invisible walls, allowing them to be pushed into bodies of water, onto holes, and on top of buildings.[3]

If the player runs into a table and quickly places an item down in front of it, they will float above the item and can walk onto the table.[1]

For this glitch to work, the post office must be located in either Acre A-1 or A-2, and the time must be set to the last minute before an event changes during the Sports Fair (e.g. 10:59 AM). If the player enters the post office as the music fades for the new hour, then pays off their home loan, the player will warp to a test map upon leaving the post office.[2]

The game may crash after the player gives a villager a present at their birthday party. This occurs due to an error that results in the game not choosing a line for the villager to say after receiving their present.[4]

In certain copies of the game or if the player's system is not set to the correct date, when opening a letter from the town hall (usually the one pertaining to the interest earned in the player's Bell account), the game won't open it but instead crashes, and since the letter is new, it cannot be thrown away until it was read, therefore locking the letter in the inventory until the player hard-resets the town or simply sets the system to the correct time.

If the player shoots Gulliver's UFO with a slingshot and a villager's house occupies the signpost it would normally land on, the crash landing noise plays, but the screen does not fade out, softlocking the game. This glitch only occurs in the 1.0 revisions of the Japanese and North American versions of the game.

If a lazy villager attempts to give an item to the player while their pockets are full, he will say he cannot give them the item; however, in his next line, he will act as though he did give the player the item.[4]

No point specials or spotlight items[edit]

Point specials and spotlight items do not appear in Tom Nook's store until a second human player moves to town.

If the player saves while the town bells are ringing at the top of an hour, the bells continue ringing as the game is saving.

If turnips are placed on a table or in the lost and found, they will not spoil.

In multiplayer, if the player places an item such as fruit, a tool, or a shell on a table in their house, then another player walks in, the table will not appear, allowing them to walk where it would be. From the first player's perspective, the second player will be walking through the table. This glitch is fixed when the visiting player exits and re-enters the room.

Get on top of windmill[edit]

If the player runs into one of the bottom corners of the windmill during online multiplayer, they can get on top of it.[5] Due to the discontinuation of the Nintendo Wi-Fi Connection in 2014, this glitch is no longer possible to perform.

If the player visits another player's town, drops items on the ground, then returns to the gate and when Copper is connecting to Nintendo WFC, resets the game, when they load their save, the items dropped reappear in their pockets while still being on the ground in the other player's town. Due to the discontinuation of the Nintendo Wi-Fi Connection in 2014, this glitch is no longer possible to perform.

Out of bounds in museum[edit]

If the player runs into the sign for The Roost in the museum from above during online multiplayer, they may be pushed through the museum wall.[6] Due to the discontinuation of the Nintendo Wi-Fi Connection in 2014, this glitch is no longer possible to perform.

If a Sapling or Cedar Sapling is planted on the last tile between the shore and the water, it cannot be dug up. 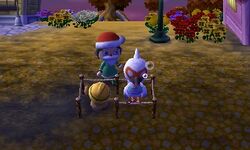 If a bench public works project is under construction, villagers may sit on the construction zone before the bench is actually built.

If a villager is on the north edge of a river and the player digs holes to the north, west, and east of them, then uses an out of bounds glitch to get into the river and walk directly south of the villager, if they save and continue, they will appear on the land occupying the same space as the villager. This glitch ends when the player fills in one of the holes.

No heavy snow during Fishing Tourney[edit]

If a Fishing Tourney falls on December 10, the heavy snow that is normally scripted to occur on that day will not occur; despite this, snow still appears on the ground the next day.

If the player takes Katie to the train station and waits until 6 AM, then goes outside, no music will play until Katie is separated from the player or the player enters a different area. 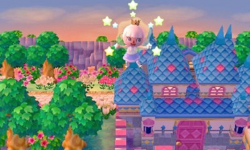 If the player holds the A button while a net is equipped while moving extremely slowly, they can pass over barriers.[7]

If the player digs two holes next to each other on the diagonal part of a river, then buries an item in one, stands between the two, and digs up the item, they will be standing between the two holes. If they then trip by either having a bad fortune or wearing the King Tut Mask, they will fall into the river, where they can walk around. This glitch was patched in the Welcome amiibo update.[7]

If the player uses a tweeter or Beans while another player is pushing them against a barrier, they will pushed through the barrier. 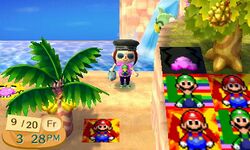 Lyman stuck in a cliff

A villager can get stuck on the wall of the cliff,[clarification needed] where they will walk in place until the player leaves the area.

If the player goes out of bounds at the train tracks, then walks off of the back of the bridge over the sea, they will fall beneath the map and can walk around. The only way to return above ground is to save the game.

If the player walks to the beach while underground and catches a bug, as long a A is repeatedly pressed they will continue to catch the same bug over and over until their pockets are full.

Prior to either version 1.4.0 or 1.4.1,[8] if Claude crafted, his house would contain two DIY Workbenches clipping into each other.[9]

Clip into items and bodies of water[edit]

If the player climbs up or down a cliff while a flat furniture item (such as the Unfinished Puzzle) is placed where they will climb up or down to, the player will stand on top of it and can walk into items or bodies of water adjacent to the item. This glitch was discovered in version 1.10.0.[10]

If the player shoots down a balloon while it is above the inaccessible fourth level of the island, the present will land on it and will be unobtainable. This glitch works as of version 1.7.0.[11]

During version 2.0.0, if the player had unlocked the ability to remodel villagers' homes and tries to remodel one while their airport gate is open before manually saving or leaving the house (which autosaves the game) then their save data would become corrupted. This glitch could be prevented if the player force closed the game without exiting the villager's house or saving. This was fixed with version 2.0.1.

Prior to version 1.1.1,[12] if two players stood next to an item placed on a 1.0×1.0 surface, with one player repeatedly rotating the surface and the other picking up the item on top, the item would go into the player's pockets while still remaining on the surface.

Raymond floating up a cliff to sit on a tree stump

If a tree stump is positioned on the edge of a cliff, a villager walking on the lower level may sit on the stump, floating up the cliff to reach it. This glitch works as of version 1.10.0.[13]

During version 2.0.0, if Portia was cooking in her house, she would be out of bounds. This was fixed with version 2.0.1.

Sometimes, when a person repeatedly tries to come to an island the player is visiting and the departure animation doesn't show, the player might get frozen in place until they force quit the game. Animations will still play.

This page could be improved with the addition of images.
You can help by uploading one or more images and including them on this page.
Retrieved from "https://nookipedia.com/w/index.php?title=Glitch&oldid=1056469"
Category:
Hidden categories: