Donkey Kong is a furniture item in every first-generation Animal Crossing game. It can be placed on the surface of tables and other similar furniture that have surfaces for items. The player can interact with this item to play Donkey Kong. 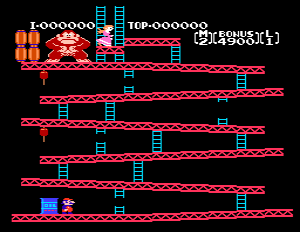 Donkey Kong is a platforming arcade game released in 1981. It was later ported to the Nintendo Entertainment System in 1983.

The gameplay for Donkey Kong is split into three levels, where the player controls Mario (known as Jumpman during the time of the game's release). The goal is travel and jump through a construction zone in order to get to the top to rescue the Princess, Pauline, from the giant ape Donkey Kong. After completing all three levels, the game loops back to the first and gameplay continues, but at a faster speed. It continues to speed up with each successful completion of the three levels.

Donkey Kong on other wikis