Punchout is a furniture item in Doubutsu no Mori+, Animal Crossing, and Doubutsu no Mori e+. It can be placed on the surface of tables and other similar furniture that have surfaces for items. The player can interact with this item to play Punch-Out!!.

Punchout does not have any color for the purpose of fêng shui.

Punchout in Doubutsu no Mori+ 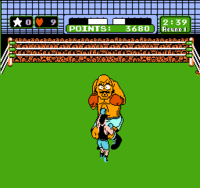 Punch-Out!! is a boxing game for the Nintendo Entertainment System released in 1987. Originally released as Mike Tyson's Punch-Out!!, the 1990 re-release with Mr. Dream instead of Mike Tyson is featured in the Animal Crossing games.

In Punch-Out!!, the player controls a boxer named Little Mac, who is fighting his way through the ranks of the World Video Boxing Association. The game consists of fights against various opponents throughout three circuits, until Little Mac reaches the "Dream Fight" against Mr. Dream (originally Mike Tyson).

Each fight has Little Mac throwing punches at his opponent until they are knocked down. Little Mac can punch to the right or left with either a jab or body blow, dodge to the left or right, block the opponent's punches, or use a high-power uppercut if he has a star, which is obtained by punching the opponent in a specific place or at a specific time. Each opponent has a unique move set and weakness.

Each bout is ended either by knockout (KO), where the opponent or Little Mac does not get up within 10 seconds of being knocked down, by technical knockout (TKO), where the opponent or Little Mac is knocked out three times in a single round, or by the referee's decision, where if the opponent has not been defeated by the end of the third round, the referee decides the winner based on how many points the player accumulated during the fight; however, some fights cannot be won this way, regardless of how many points the player has.