The Security-Monitors Wall is a wallpaper item in Animal Crossing: New Horizons.

The Security-Monitors Wall can be obtained from Saharah for

5 Saharah Tickets. Saharah can also sell this item at her Co-Op on Harv's Island for

3,600 Bells. This item cannot be ordered from Nook Shopping.

This item appears in the homes of the following villagers:

Barold. In Happy Home Paradise, this item is unlocked for usage in house designing when doing a vacation home request for the following villagers: 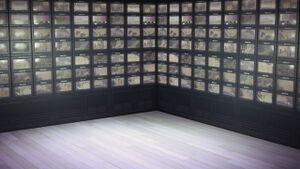 The Security-Monitors Wall applied to a room in New Horizons

Among these scenes from top to bottom, left to right, include:

When placed in a dark setting, the monitors on the wallpaper will glow.