In the prerelease build of the international version of Animal Crossing shown at E3 2002, a Fireworks Festival is shown taking place on a Saturday in August like in the Japanese version, rather than on July 4 like in the final international release.[1]

Another item also named "Legend of Zelda" (filename: hayakawa_famicom)[nb 1] appears identical to the NES item and crashes the game when interacted with in Animal Crossing. In Doubutsu no Mori+, it is fully functional and contains the cartridge version of the game; however, it is still modeled after a Famicom Disk System.

Eight clothing items—plum kimono, somber robe, red sweatsuit, blue sweatsuit, red puffy vest, blue puffy vest, summer robe, and bamboo robe—are worn by villagers during various events and can be obtained and worn by the player only through the use of memory editing. The plum kimono appears in the houses of Monique and Chrissy, despite being normally unobtainable as item. 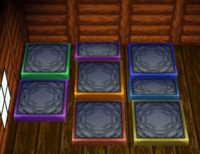 All eight fossil bases placed in a room

The unused chair in Doubutsu no Mori+

The unused chair (filename: sum_gst_chair01) is a fully functional ghost-themed chair in Doubutsu no Mori+. In Animal Crossing, the chair is replaced with a DUMMY model and is nonfunctional.

DUMMY is an furniture item that, due to an oversight, can be obtained from igloo campers. It is a white triangle with the Japanese text "ダミー" ("dummy") on it. The model for this item is also used by several other unobtainable items, including the zabuton, chest, rack, unused dresser, unused monkey, modern den chair, golf trophy, tennis trophy, and kart trophy.[nb 3] In addition to these items, many DUMMY items share names with items only present in Doubutsu no Mori+ and are likely leftovers from that version.[nb 4]

The sickle as it appears when dropped outside

The sickle is an tool that can be equipped but has no model or functionality. It appears as a net in the player's pockets and uses an otherwise unused sprite of a toolbox when dropped on the ground.[nb 5]

The mbg is an unnamed item that can be placed outside. Initially, it is invisible, but once the player enters a building and returns, the item becomes a dark yellow cube that moves left and right while rotating counter-clockwise. The block has collision and will push the player if they are in its way, meaning it was likely a debug item used to test collision. Occasionally, the cube's color fades to a bright yellow, before returning to dark yellow.

In Animal Crossing, the mbg has a corrupted icon, and in Doubutsu no Mori e+, it uses the same icon as the mosquito.

The icon for the mbg and airplane items 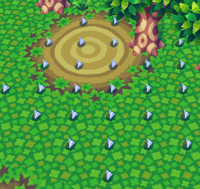 Several paper airplanes on the ground

Each time the player enters a building and returns, the number of paper airplanes doubles. This repeats indefinitely, until the game crashes due to the number of objects rendered.

Like the mbg, the airplane has a corrupted icon in Animal Crossing and uses the mosquito's icon in Doubutsu no Mori e+.

There are several items normally unobtainable that have corrupted or missing names, or that have no function. Some are indeed used in game, but never appear in the player's pockets.

The unique icon for "Unknown"

Shaki (シャキッ) is a unused squirrel character. Through memory editing, her model can appear in the game in place of another character, though she has no unique dialogue or functionality. She can either have the name "

Kù«–•B¡¡" or "Jambette" depending on which memory address she is spawned in, and she will use Kapp'n's dialogue.

Two messages that mention E3 exist within the game's data but remain unused:

Given the content of the messages, it is likely they were planned for an E3 demo and were meant to be spoken by Pelly or Phyllis if the player were to attempt to send or save letters.