Villagers are internally identified by the game using a numbered system. This is a similar system to the one used by later games, but in a different order. IDs also use hexadecimal numbers instead of decimal. Villagers are listed in the order they were added to the game; thus, while many species are grouped together in alphabetical order, not all are together.

While villagers already in the game use the same system, it is unknown villagers introduced in Doubutsu no Mori e+ fit with this system, due to their villager data being stored on e-Reader cards, which is then assigned to blank villager "slots" when scanned rather than being coded in the base game. Due to being excluded from the later system, this means it is unknown if the six e+ promotional villagers (Nindori, Pierre, Bow, Meow, Shoukichi and Shinabiru) have been assigned IDs at all. 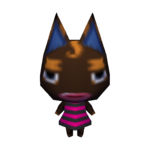 The unused CAT13 textures as they would appear in-game.