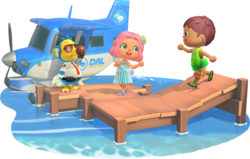 The Mystery Island Tour is a leisure activity in Animal Crossing: New Horizons operated by Dodo Airlines. The tour can be embarked on in exchange for a Nook Miles Ticket by speaking to Orville at the airport. Each tour brings the participant to a random deserted island, known as a Mystery Island, where they can harvest materials for crafting and catch rare bugs and fish. They also may find fossils, DIY recipes inside Message Bottles, and villagers if there is an empty plot on the player's island. 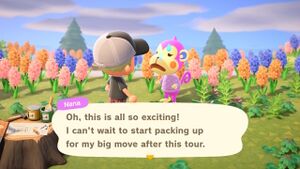 An island with several isolated raised sections and no rivers or ponds. Hardwood Trees can be found all over the island. Only insects associated with trees will appear here.

This island is almost identical to the Bamboo island, but with Cedar Trees instead of Bamboo Trees. Only insects associated with trees will appear here. Four rocks can be found in each corner of the island.