For the in-game event itself, see April Fools' Day

Since 2016, Nookipedia has been participating in the annual April Fools' Day event via ways of hoaxes and jokes. The following are a list of jokes that Nookipedia has used in the past.

In 2016, Nookipedia went for a subtle joke by having its skin constantly change color and season for each page load. 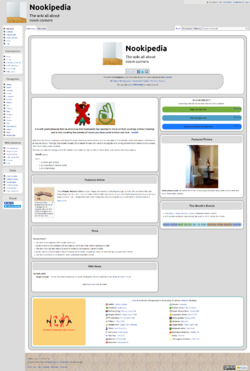 The wiki all about room corners in 2018.

Taking the terminology of nook (a corner, as in a room), Nookipedia became a wiki about nooks instead of the Animal Crossing series.

In 2021, Nookipedia participated with various Nintendo Independent Wiki Alliance wikis on the Edit-by-Pigeon program hoax, adding a site notice that Brewster would let editors deliver edits to the wiki's staff via letters.

To coincide with Cephalobot's birthday (April 1), Nookipedia announced that it had been seized by Cephalobot to become Cephalopedia. These changes not only affected the main page and certain articles and templates, but also the site's theme, causing the main site to become a monochrome gray and having any rounded edges be replaced with sharp, squared edges.