Pitfall seeds (known as pitfalls in Animal Crossing) are items in the Animal Crossing series. A pitfall seed has the appearance of a white sphere with a large red exclamation point in the center on both sides.

The primary use of a pitfall seed is for the player to bury it, at which point it will look like any other buried item. When a villager or player walks over a buried pitfall seed, they will fall into it. If the player speaks to a trapped villager, they will rattle about their situation and jump out. Depending on the game or personality, they will be angry or sad after escaping. However, special characters such as Tortimer and Joan are "immune" to Pitfalls, and in New Horizons, the player will not receive a friendship penalty from a villager who falls into a pitfall. Any player who falls into a pitfall can get out by rapidly tapping any button. A second use for Pitfall Seeds are to place them in letters written to neighbors, and in return, they will send the player a present. 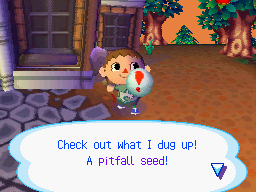 In Wild World and City Folk, pitfall seeds are found every day and one spawns per day alongside some fossils if any previous Pitfall Seed has been stepped on by the player or a villager, or has been dug up. pitfall seed can also be collected from the lost and found run by Booker at the checkpoint, or found in the recycling bin in the town hall. As with his appearance in Animal Crossing, Tom Nook will throw out the pitfall seed if given to be sold. 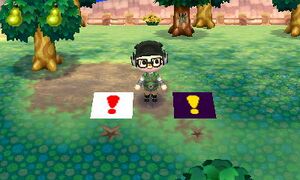 The difference between the normal and tricky pitfall seed.

In New Leaf, in addition to the returning pitfall seed mechanics from Wild World and City Folk, a new type of pitfall seed, the tricky pitfall seed, appears in the game. They can only be found at the police station and are very rare. They take the appearance of normal Pitfall Seeds except the sphere is dark purple and the exclamation point is yellow, similar to fossil's color scheme. They also work the same way as Pitfall Seeds, except the 'star mark' left behind is smaller, making them more difficult to see.

For the first time, pitfall seeds can now be sold for Bells, with Re-Tail selling for a mere

8 Bells. In addition, if the player steps on a pitfall seed and falls into the hole, any nearby characters (including special characters and villagers) will express their shock and fear towards the player.

In Animal Crossing: New Horizons, pitfall seeds can no longer be found buried in ground, however it has its own DIY recipe that can be obtained from Nook's Cranny for

900 Bells or when the player digs up a pitfall seed buried by another player and automatically learns it. Until version 2.0, the pitfall seed could be obtained from jock villagers. They function normally as from previous games. Using a vaulting pole or getting up from a chair into a hole also functions the same as falling into a pitfall.

Pitfalls make an appearance in 🎬 Gekijōban Doubutsu no Mori, where Yū and Alfonso is shown digging holes to prank some villagers. Ai ends up being stuck in one of their pitfalls, but leaves ungrudgingly, as unbeknownst to them Ai's friend Margie's sudden leave from Animal Village left Ai in a depressed state.

Pitfalls make an appearance in the Super Smash Bros. series, appearing in Super Smash Bros. Brawl, Super Smash Bros. for Nintendo 3DS / Wii U, and Super Smash Bros. Ultimate. When thrown, they are buried for a short time, but fighters can quickly escape by quickly waggling the control stick back and forth. If the opponent is in the air and the pitfall hits, they are "meteor smashed", or shot directly downward. Or, if thrown and it lands on the ground, it appears to vanish in a series of sparks. When an opponent walks over the place where the Pitfall is thrown, they will be buried.