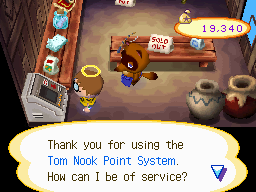 The player accessing the Tom Nook Point System in Animal Crossing: Wild World.
Not to be confused with Nook Points.

The Tom Nook Point System (TNPS) is a loyalty program for Tom Nook's store in Animal Crossing: Wild World and Animal Crossing: City Folk. Accessed from the Point-Tracking Machine (PTM) in the store, the Tom Nook Point System keeps track of the player's purchases, rewarding one point for every 100 Bells spent on a single item. As the player accumulates points, they will receive unique items and increase their member status, giving them store discounts.

Around once per month, Tom Nook's store holds a Point Special, in which the player receives five times the normal amount of points for each purchase. Point Specials always occur on weekends where there are no events, and they are announced on the bulletin board three days in advance.

In Animal Crossing: Wild World, the player increases their member status when they accumulate a total of 300, 5,000, 10,000, and 20,000 points. Reaching each status rewards the player with a unique store model, and the last three statuses rewards store discounts. Point Specials do not occur until a second player moves to the player's town. 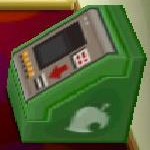 In Animal Crossing: City Folk, the point statuses, rewards, and discounts return from Wild World. New options on the Point-Tracking Machine include "Visitor points" and "Exchange present". Selecting the former allows the player to receive three points each day for visiting the store; if done while visiting another player's town, the player instead receives five points. Selecting the latter option allows the player to spend points in exchange for Nintendo-themed items; the player can accumulate a total of 50,000 points to spend.