From Nookipedia, the Animal Crossing wiki
(Redirected from U.F.O)
Jump to navigation Jump to search

Not to be confused with Gullivarrr.
"When you are called to greatness, pick up the phone."
— Gulliver, Animal Crossing: New Leaf - Welcome amiibo

Gulliver is a gull in the Animal Crossing series. His function is to reward the player with special furniture, usually artifacts from around the world that cannot be obtained anywhere else in the game. The "Gull" part of his name references him being a seagull, and Gulliver's name is also a reference to the book Gulliver's Travels, which is about a man who travels to the far corners of the earth, before being shipwrecked and washing up on the shore of a previously undiscovered land.

Gulliver first appears as a sailor in Doubutsu no Mori and Animal Crossing. Gulliver can sometimes be found lying on the beach, and must be first woken up by talking to him multiple times. He then tells the player an unbelievable and dramatic story about his adventures at sea, sometimes involving a giant squid which is assumed to be a jellyfish. After listening to him, Gulliver will give the player a random furniture item to express his gratitude. Starting in Animal Crossing and Doubutsu no Mori+, however, Gulliver instead gives a rare piece of furniture to the player. In the Japanese version of the game, Gulliver speaks entirely in katakana, meant to symbolize that he is foreign and not speaking Japanese. He may even speak coherent English in the middle of his sentences.

If Gulliver is set to appear in player's town on a day they visit the Island, he can be seen floating towards their town's beach. However, if they're already seen Gulliver washed ashore, he won't appear.

In Animal Crossing: Wild World, Gulliver is no longer a sailor, but an astronaut that infrequently flies over the player's town in a typical UFO styled spacecraft, called Porpoise 5000, a possible reference to the ship that Captain Olimar uses in the Pikmin series, called the Dolphin.

Gulliver's U.F.O. appears on a random weekday, even when it is raining or snowing, at any time of the day. Booker will know nothing about Gulliver's appearance, since he does not pass through the town gates. The event of his U.F.O. appearing is triggered by the clock, and it will only come into view if the final digit of the time is a two or a seven, as well as if no other special visitor is in town (this includes Tortimer, Redd and even Mr. Resetti). It always appears in the first xx.x2 or xx.x7 time slot after the player starts up the game, assuming that the player is outside. If they are in a building when xx.x2 or xx.x7 is hit, the U.F.O. will instead appear at the next of these time slots.

If shot down with a slingshot, the U.F.O. will crash into one of the many signposts located throughout the town. At the crash site, the player will find an unconscious Gulliver, who, after waking up and doing a quick survey of his wrecked spacecraft, discovers that five of its parts broke off when it made impact with the earth. The player can help the astronaut regain his ship's lost parts, which can be found scattered about the town. If all five parts are returned to Gulliver before 6 AM, he will reward the player with one of his rare exotic items. Gulliver and his spaceship then disappear the next time the game is played.

Gulliver's UFO on the beach in City Folk

In Animal Crossing: City Folk, he retains the same appearance as before in Animal Crossing: Wild World. His spacecraft can be seen flying about the same height as a floating balloon, though much faster. The player can shoot at him with a slingshot, causing his ship to malfunction and appear the next day on the beach. During this time, a piece of his spacecraft will land somewhere in the town. He takes a while to regain consciousness, usually about five attempts of talking to him. When he wakes up, he will survey his surroundings and make unusual remarks about the player's appearance. He will ask the player for help, to find his spaceship part, which appears as a small, cog-like item on the ground. When given the part for his ship, he will give the player one of his rare items.

Icon for a Spaceship Part

In this game, Gulliver's U.F.O. appears only from Monday to Thursday during the first ten minutes of an hour, and enters town when the final digit of the time hits 2 or 7. Unlike in Animal Crossing: Wild World, it is not guaranteed to appear in the first time slot after starting the game, and occasionally the player may have to wait several hours before it appears. Also, it generally only appears when there are no other visitors in town; however it can appear when Katie, Kaitlin or Mr. Resetti are present. It always makes two passes over the town on each appearance (the second pass begins a few seconds after the U.F.O. disappears over the cliff at the edge of town), moving at half the speed that the player runs, and flies on the top row of the 2nd, 3rd or 4th acres from the top of town, which is the same path that the balloons take.

It is possible for Gulliver's U.F.O. and a balloon to appear at the same time, and on the same path. If this happens, the U.F.O. will pass through the balloon. 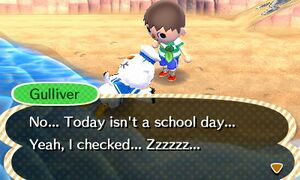 Gulliver appears in Animal Crossing: New Leaf as he does in Animal Crossing, with his sailor outfit, washing up on the shore of the beach. To wake him up, the player may either use the megaphone and say Gulliver's name into the 3DS's microphone while being adjacent to him, or try to talk to him a number of times. Once awoken, he will ask the player where he was heading before he washed up on shore, providing the player with key information about his destination, a country in the real world, such as the United States or France. When answered, Gulliver may send a letter the next day containing a present from the country he is visiting. Phrases that are said by Gulliver include:

If Gulliver notes that the guess is incorrect, he will send a letter containing a chocolate coin. The chocolate coin looks exactly like 100 Bells, except that it may be eaten, and may be sold for 25 Bells at Re-Tail.

A buried item spurting water out of the sand. It can possibly be a Communicator Part

The player digs up a Communicator Part.

In New Horizons Gulliver reprises his role as a special visitor, and sometimes can be found lying unconscious on the beach on random weekdays (no more than once a week, and typically once every 2-3 weeks once the island is fully built). Like the previous entries of the game, he can be woken up by repeatedly talking to him or hitting him with a net. However, unlike past titles, he will recognize the player if they have helped him before. When he wakes, he tells the player that he's fallen off his boat and has washed up ashore, but doesn't put much thoughts into it as it happened several times before. Trying to reunite with his crew, Gulliver will try to call them though his cellphone - called "communicator" by him, only to promptly realizes that it is broken. Unable to call for help, Gulliver will then ask the player to assist him in finding his communicator parts buried somewhere along the beach for a total of five of them; their locations are identified similar to how Manila Clams are found, by small holes which spurt water in the sand.

Once all the communicator parts have been found and returned to him, Gulliver will manage to contact his crew to take him back. He remains on the player's island for the rest of the day, and if talked to he will repeatedly try to check his cellphone for any news, seemingly hinting in his breath that his crewmates aren't really eager to see him again while deluding himself with the desire of a great comeback party. The next day, the player will find a gift in their mailbox as a reward. If there are multiple players on the island, Gulliver may discover that his communicator is once again missing parts when other players approach him.

Additionally, Gulliver is now responsible for the obtainment of the Gold Shovel; if Gulliver has been helped 30 times, the player will find the Gold Shovel DIY recipe in the mail instead of the usual limited gift.

Any communicator parts that are found but not returned to Gulliver will become Rusted Parts the following day. If Gulliver has successfully reassembled his communicator, the next day there will still be at least one Rusted Part in the recycling bin at Resident Services. These parts are required to craft the Robot Hero DIY item, but have no other use to date.

In 🎬 Gekijōban Doubutsu no Mori, Gulliver pretends to be an alien. He appears when his UFO crashes into Animal Village and says that he has lost his spaceship parts. After Ai, Margie, Rosie, Alfonso, and Yū recover what they think is the final spaceship part, Champ returns another one. The part found by Ai and the group turns out to be an actual alien, who thanks Ai and returns with its friends to parts unknown.

Gulliver cameos in a few scenarios, most involving him washing up on the beach and the player attempting to wake him up. His amiibo card is also compatible with the game, allowing him to move to the player's town, and be used in the amiibo card minigames.

Gulliver appears in Animal Crossing: Pocket Camp, again as a sailor. He will show up on Sunburst Island with his boat and ask the player to give him old, unwanted furniture and clothing rather than selling it. If they give him 10 items, he will set sail on his boat for a few hours. When he returns to Sunburst Island, he will always give the player snacks as a reward for helping him. If the player gave Gulliver items he deemed "great" then Gulliver will sometimes return with a new villager that is automatically befriended and can be invited to the player's campsite at any time, or he may return with a map usable in Blathers's Treasure Trek that can unlock another villager. 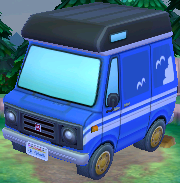 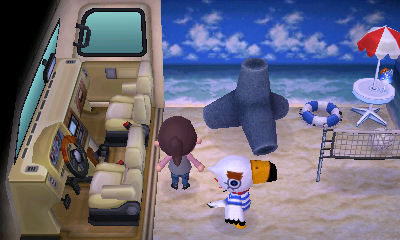 Below are the items Gulliver can reward the player with in each game.