"I got an umbrella octopus! Too bad I'm already soaked."

"My feathers, could there be a more adorable sea creature than the umbrella octopus? I daresay not! These deep-sea octopuses are on the smallish side and use the cutest ear-like fins to flutter about. Meanwhile, it's the web stretched between their tentacles that gives them their name. Hoo, it's true! With arms stretched wide, they look for all the world like an umbrella! Though surely the last thing the umbrella octopus wants is to stay dry." 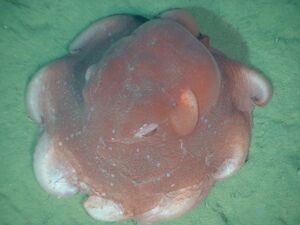 The umbrella octopus, also called flapjack octopus, usually appear dark red. Their maximum size is 20 cm (7.9 in) mantle length. They have eight jointed legs which are affixed together in an umbrella shape. They have a gelatinous body, which spreads into a parachute shape when maneuvering through dimly lit water. The flapjack preys on small fishes and planktonic crustaceans. They swim by moving their fins, pulsing their webbed arms, pushing water through their funnel for jet propulsion, or all three at once. Their depth range is: Para-larvae 200 m (660 ft), adults 500–1,500 m (1,600–4,900 ft).