This page isn't quite ready for showtime yet. . .
Auto-confirmed users may edit this page until it is moved to the appropriate namespace. Relevant discussion may be found on the talk page.

This page isn't quite ready for showtime yet. . .
Auto-confirmed users may edit this page until it is moved to the appropriate namespace. Relevant discussion may be found on the talk page.

It should be noted that this page does not cover non-English Animal Crossing social media accounts if an English alternative exists. 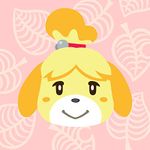 Profile picture for @animalcrossing as of August 2020

@animalcrossing regularly posts content relating to the Animal Crossing series, including gameplay screenshots and trailers. The account is fictionally operated by Isabelle, and its posts are from her in-universe point of view and are in-character. The account was created in April 2013 and was "operated" by Isabelle until prior to the release of Animal Crossing: New Horizons, when Tom Nook became the fictional account operator, tweeting in character like Isabelle. In July 2020 Isabelle returned as the fictional account operator.

Only one official English-language Animal Crossing account exists on Facebook: the European @AnimalCrossing (Animal Crossing). As of August 2020, the account is inactive, having only a single post which welcomes users to its page, dated September 24, 2014.

While no official Animal Crossing YouTube channel exists, Nintendo's official channel regularly uploads Animal Crossing-themed videos, including game and update trailers and gameplay videos. Additionally, various videos are linked to by the Animal Crossing Twitter accounts, and some trailers are also aired as advertisements on both YouTube and broadcast television.

Note: New Animal Crossing videos are regularly uploaded the Nintendo YouTube channel. As a result of this, this list may not be up to date.